In Room 910, the player finds themselves in a large room with fountains on either side. There is hardly any light, rendering navigation difficult. The notes seem to come from marine biologists studying the mysterious recent deaths of whales. The door at the end leads to a corridor with two doors, one locked with a password and the other leading to a view of what seems to be either a huge fish tank, or the ocean. A whale passes by the window after the player picks up the note in the room.

The door on the right of the entrance room leads to a corridor with two doors. Inside the rooms are more notes, including one with the password, 4132, and a lantern which allows the player to see better in the dark and use the number lock on the door. The password locked door contains a note and a key, needed for the locked room which contains a water pump, which will lower the water level and allow the player to open the metallic door in the main room. In the HD Renovation, the password locked door contains the water pump and note instead.

After shutting down the water supply, the player can enter the next rooms which are completely flooded, and the lantern is snuffed out. There is one last note and a locked door. After finding the key and opening the locked door, moving deeper into the room the player will find Specimen 13 sitting on a floating crate and, when approached, will dive into the water and start chasing the player.

It chases the player through flooded rooms and floating crates until about Room 930. This specimen will never return after being encountered once in the original game; for HD Renovation, Specimen 13 can re-chase the player.

Room 995 contains the final save point/elevator of the game.

At Room 1000, the "final" door can be found. It takes the player "outside", with a blue sky and green fields. Then the sky seems to crash with an error message as Spooky appears, looking disappointed that the player survived. But she perks back up when she hears Specimen 9 screaming, stating that she is sending the protagonist on a final test "to prove your fortitude or dedication. Or something".

A door appears and the player finds themselves in a short, white hallway that leads them to a small area with a radio on a white table. A voice says, "I'm taking all those 'logs' they keep throwing out... And I'm nailing them together".

To the right is a door that the player can go through that leads to a hallway with many doors, but only the door at the end can be pushed open. The door leads to a room with three other doors, and again, only the door straight ahead can be opened. A small panel reads 731, and a weird voice whispering this number unintelligibly can be heard. Going into that room triggers a cutscene of Specimen 9 transforming into its boss form.

The player is then transported to a room where the new form of Specimen 9 is floating in front of them, and the final battle begins.

The player will get one of two endings depending on what they've done through their playthrough.

In addition, there's a joke ending in HD Renovation.

A bright room with a view of the ocean.

Ditto, with a whale behind the observation glass.

The 3D whale in HD Renovation.

The lantern in action. 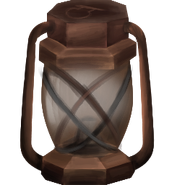 The room containing a key to the Water Pump Room.

The room where the lantern snuffs out and is rendered useless.

The last save point.

The player in the "freedom" room.

A mysterious voice comes from the radio.

End of the message.