CAT-DOS is a fictional operating system within Spooky's Jump Scare Mansion. It can be found in its own special room, and contains information about the different Specimens found within the mansion.

The CAT-DOS is a group of three large cubic computers, sitting between two doors near the end of the room. The one in the middle has a red screen and a small keyboard, with the other two having blank black screens. Only the middle one can be accessed. There are also what appear to be bloodstains when it is accessed.

Upon examination, the player will see on its red, faintly static screen the first two following options: 'ENTER' and 'EXIT_PROGRAM'. The player can choose 'ENTER' to continue to the next menu, in which with three new options are available: 'ACCESS_SPECIMEN_DATABASE', 'MODIFY_HOUSE_LAYOUT' and 'BACK'.

The 'ACCESS_SPECIMEN_DATABASE' option will bring the player to another menu, in which there are entries for all Specimens that appear in the normal game. Specimen 1 to Specimen 5 are available all the time. After about 300 rooms, Specimen 6 to Specimen 11 become accessible by selecting the "Next" option, though the real entry for Specimen 10 can only be accessed once the player has made it through Room 500; If they have not done so, CAT-DOS will just open the old Specimen 10's entry. Specimen 9 appears as 'Specimen __' and, sometimes, its entry will not open. After Room 800, Specimen 12 and Specimen 13's entries can be accessed.

Attempting to select the 'MODIFY HOUSE LAYOUT' option will only give an error screen.

A secret set of entries can be found if the player tries to access 'MODIFY_HOUSE_LAYOUT' six times and then open Specimen 9's entry. A secret menu will show up with the entries of Specimen 9's Boss Mode and four unknown Specimens (not to be confused with Unknown Specimens) named: The Mattress Man, The Dolphin, Lines, and Paina. It appears that all the Specimens are active except Paina, who is still in development. This can only be done after room 900.

As with the arcade machines, the CAT-DOS interface is accessed directly from the overworld, and does not zoom in when used. The blood stains on the interface appear regardless of whether the player is currently using the machine. The computers surrounding the CAT-DOS monitor were replaced by generators, similar to those found in the Brainframe Room.

Specimen 9 now defaults to 0 fatalities and tracks how many times it has killed the player. Getting killed by other specimens will also add to their total fatalities.

CAT-DOS entry for The Mattress Man.

CAT-DOS entry for The Dolphin. 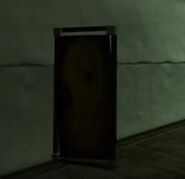 The Mattress Man in GMod. 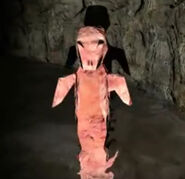 Wallpaper of Paina.
Community content is available under CC-BY-SA unless otherwise noted.
Advertisement