The First Floor is the starting area The Protagonist walks into in the Spooky's Dollhouse DLC. It features two main areas: The Northside Studies and West Wing.

The Garden is a sub-area that connects the First Floor with the rest of the Doll House, which is the Great Hall and GL Labs Area.

The starting area consists of two connected rooms. There's a locked door to the left, which requires a key and leads to the West Wing, and to the right there's the only save point in the entire DLC, which is a music box.

Spooky shows up in this area after the player has obtained the Winding Clock Key.

In the adjacent room, there's another locked door to the left that can be unlocked from the other side. To the right, the door that leads to the Northside Studies and next to the door there's the Doll, an item crucial for the player's survival and progression through the Doll House. Right in front of the door frame to this room there's a small table with a map.

The player has to look down and press the interaction key (E) in order to use it. The map will indicate with a blue pulsating glow the room the player's currently in. The map will change depending of the area the player is currently in, excluding for the Root Cellar which doesn't have a map. 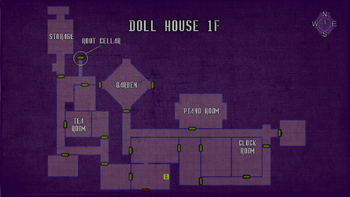 Near where the corridor takes a turn to the left, there's the Clock Room. Turning the corner there's a door leading into another hallway. To the right, a room with a note. Halfway through the hallway there's the Piano Room. At the end of the hallway there's a door to the right which leads to The Garden. The door to the left is the one that was locked from the other side in the main area, and can now be unlocked.

This room contains a grandfather clock with Bolt Cutters inside it. In order to access the Bolt Cutters, the player has to obtain a Winding Clock Key from the Storage, located in the West Wing. After using the key on the clock, the handles have to be rotated to tell the time 5:45.

The Bolt Cutters are used to cut the barbed wire stopping the player from going into The Garden.

A room with a piano. The piano must be interacted with to get the West Wing Key. After obtaining the key, Husks will start appearing on the First Floor.

The West Wing can be accessed after the key in the Piano Room is acquired. Rooms of note are the Tea Room and Storage. Husks will be roaming in the halls and some rooms of this area.

A staircase leading to the Root Cellar northmost part of the area, next to Storage and in front of another room. There's also a hole in a nearby wall. Interacting with it will get the player's hand stuck in it and take 30 damage.

The Tea Room can be found near the end of the West Wing, heading to the Storage. The player can use this room to charge the Doll so it can be used for healing and stopping the Frenzy spawns.

The Doll must be placed on the pedestal facing the tea table and the player must sit across it. There's a meter showing the Doll's "charge".

To access this room, one must leave the Doll on the pedestal. Once inside there'll be a note on a small desk, presumably written by the enemy locked here: Woormy Charles. He's situated at the end of the room, along with the Winding Clock Key. He'll become active when hit with the axe or the key is picked up.

After the player acquires the Bolt Cutters, they can go to The Garden. A grave sits at the opposite end, Monica's grave, Spooky's mother. A note lies next to it written by Spooky's Father.

A broken doll found at the entrance, near the save point.

The hole in the West Wing. 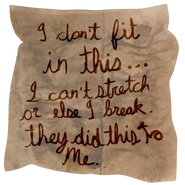 Spooky in the save point area.

The door leading to Th Garden, with barbed wire on it.

The Doll crying in The Garden.

The Doll covering its eyes in front of the grave in HD Renovation.

Close up of Monica's grave in the garden.

The fingers blocking the door to the garden.

The cut barbed wire and cut fingers, with the bolt cutters resting next to the door in HD Renovation.
Community content is available under CC-BY-SA unless otherwise noted.
Advertisement