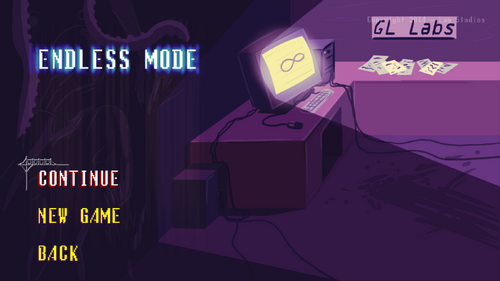 Endless Mode is a gameplay mode in Spooky's Jump Scare Mansion that was released as part of a large update on July 4, 2016.

The player starts in Room 0 with the Axe already in hand. The gameplay is exactly the same as the main game, although the mansion continues endlessly instead of ending after Room 1000.

There are save points every fifty rooms until Room 200, where they occur every 100 rooms instead. After Room 1000, save points are available every 200 rooms. Dying will lead to the deletion of the player's save file, forcing them to start anew. Quitting the game is also disabled during a chase.

Endless Mode returned in Spooky's HD as a free patch on October 20th, 2017, with differences from its original counterpart.

In contrast to the original's Endless Mode, where the player started in a random room, they will now begin outside the mansion, with a boarded-up door in the middle of the area. The player is given a choice of which weapon to take; the Axe is lodged into the frame of the door, and the Sword is lying on a surgical instrument table found at the top-right of the starting area (only if the player has cleared Karamari Hospital at least once). Both weapons work the same way against all enemies, although the sword's priming animation is five frames faster than the axe's. The axe's swing animation is six frames faster than the sword's, however. In short, the sword is released faster but the axe ends its attack animation faster.

Exclusive to the HD Renovation and worth mentioning for this mode, the player will be invulnerable while going through a door, and they have 0.35 seconds of invincibility, meaning no other enemies can hurt them for that window of time if they've already taken damage.

Exiting the game during a chase via closing the window or force-closing the game (Alt-F4, Task Manager, etc.) will now delete the player's save file as if they had died. A report screen will show up when the player dies, showing their settings and old best score if they had any.

Also unlike the original, each specimens' scripted room from their original appearances (i.e. Story Mode and Karamari Hospital) will also appear. In each floor of 100 rooms, one of these rooms will randomly appear. From that point on, the specimen in question will be available to chase the player, much like the previous Endless Mode. Specimen 2 is the sole exception to this rule, as it is in the "Rechase Pool" (explained below) by default, though its starting room can be encountered rarely. New starting rooms have also been created for the Endless Mode-exclusive "Unknown Specimens", though White Face and Spooper still do not have proper starting rooms.

Sometimes, large spider cobwebs will cover parts of some of the rooms the player encounters. They can be destroyed with one swing. If not, they will slow the player down, similar to Specimen 2's puddles. More room types have been added as well.

It is now possible to encounter more than one specimen at once, significantly increasing the difficulty. This includes getting chased by 2 of the same specimen or getting chased by multiple Specimens simultaneously, up to a maximum of 5. The way this works is assumed to be as such:

At the end of a run, a results screen is displayed, showing the player's stats for that run; whether or not jumpscares and specimens were enabled, the room they made it to, whether or not they surpassed their best score, and their global ranking.

Upon surpassing 1000 rooms in Endless Mode, a hatch covered by a plank will appear near the door at the start of Endless Mode. This hatch will lead into a room with the SCARE (Secure Central Access Resource for Employees). When interacted with, the SCARE will show the amount of enemies the player has encountered in Endless Mode (measured as their CAT-DOS training), which will allow the player to skip rooms up to a maximum of 2500 through the use of the Express Tunnel.

The Sword found in Endless Mode HD, placed on a surgical table.

The boarded up entrance, with the Axe stuck next to it.

A closer look of the mansion.

The hatch that appears after surpassing 1000 rooms.

One of the Express Tunnel rooms in Endless Mode.

Specimen 4 chasing the player, with Specimen 2 close behind.

Specimen 4, Specimen 5, and two instances of Specimen 11 chasing the player.

Specimen 10 chasing the player with Unknown Specimen 1 lagging behind.

Specimen 5 and The Old Man in Specimen 13's chase.

A player being chased by Monster 2, Monster 5, Specimen 5, Unknown Specimen 4 and Hooked Doll.

The Clown and the Hooked Doll chasing the player.

The "No Escape" text replacing the "Return to Menu" option when being chased by a Specimen.
Community content is available under CC-BY-SA unless otherwise noted.
Advertisement