After making it to The Garden, the player must go to the Great Hall in Spooky's Dollhouse, located West.

The area starts with a corridor that leads into a large room with empty frames, windows and a pedestal at the opposite end. Placing the Doll on the pedestal will activate the Electric Barrier located at the door the player entered through. Touching the barrier will harm the player.

There's a door to the left of the pedestal and another to the right. Taking the Southern door will bring you to a hallway. Going right will lead to two doors, the CLOWN Room to the West and a room with a note to the East.

The CLOWN Room, as it name implies, contains The Clown, locked behind iron bars. The Doll will cover its eyes when brought into this room. The walls are painted yellow and the floor has a polka dots pattern. The Clown will say "Bye bye!" the first time the player leaves the room. The Clown escapes its confinement after the player obtains the keys from the doll hands. In HD Renovation, The Clown will appear in the Northern side and entrance corridor of the Great Hall. 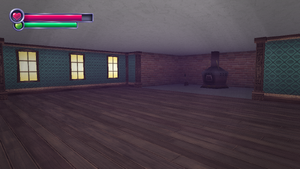 Walking down the hallway to the left is the Furnace Room. The Doll is required to access this room. The doll hands found in this area must be placed in the furnace. Touching the furnace while it's on will hurt the player.

The northern side contains two rooms. The first room contains some creepy dolls and a note. The second room contains a single doll that follows the player with its head, and a pair of doll hands that are stuck together on a table. The player has to bring the doll hands to the furnace to melt them and obtain the GL Labs Area key. After obtaining the keys, Spooky will meet the player at the Electric Barrier, having brought 12 dormant Husks, which are blocking the exit. The Doll must be placed on the pedestal in order to activate the Electric Barrier and move the Husks out of the way to leave the area. 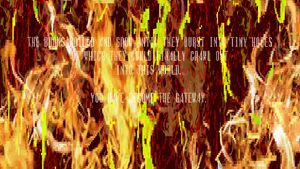 The player can be killed by touching the furnace repeatedly. It has its own death screen, composed of rising flames and the text "YOU ARE A FOOL.", followed by:

THE BURNS BOILED AND GROW UNTIL THEY BURST INTO TINY HOLES

OF WHICH THEY COULD FINALLY CRAWL OUT

YOU HAVE BECOME THE GATEWAY. 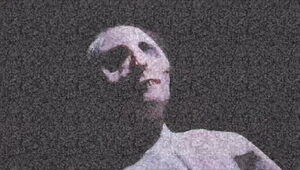 The death screen will show a face, presumably The Protagonist's, being electrocuted as static flashes.

While virtually illegible due to the static, the death screen reads:

BONES BEGIN TO BURN AND SHAKE

LEAVE THE BODY THAT YOU FORSAKE

A secret area can be found in the northern side. The player must take a left, where there's a fake wall, as soon as they enter the northern side. This will reveal a door that leads into a maze-like room. Going into the secret while the Doll's mood is low will cause a lot of Frenzies to spawn that can deplete the player to less than half their health if they all manage to hit them.

Walk to the other side of the room, then go left, there will be another fake wall. The player will go into a space with a floor that extends endlessly. In the HD Renovation, it is a space-like void, similar to the one The White Cat appears in Story Mode. At the other side, there's text reading "You're in the know right?", followed by a colored Caesar Cipher that, when deciphered, reads:

YOU AND ME ALL

The deciphered text can be entered as a password if the ciphered text is inspected. After entering the code, a death screen message will appear, identical to Frenzy's death screen, but reading:

"Pillars of molten twisting flesh arose from the ground like an ant nest that was boiling from the inside.

Lighting screamed through the sky but did not dissipate and instead left black marbled scars across the horizon.

The air grew heavier and heavier until it too became solid mass that writhed beneath your feet.

The Clown Room in HD Renovation.

Close up on one of the creepy dolls.

The creepy doll in the room with the painting.

Spooky at the Electric Barrier with the 12 Husks.

Close up on the Husks.

Ditto, without static and showing another frame.

The secret area, with the ciphered text in HD Renovation.