Hooked Doll is one of the enemies introduced in Spooky's Dollhouse, the second DLC for Spooky's Jump Scare Mansion.

The Hooked Doll is a female life-sized doll. She has pale beige skin and a dark pink dress. Her arms and legs end in nubs instead of hands and feet. Her most notable feature is the several hooks that are punctured through her.

In a separate room, a sculpture of a person's back can be found. Upon using the axe on the sculpture, the player will have a vision of the Hooked Doll charging towards them. When the vision ends, the sculpture will be gone, and a Metal Pinwheel Piece will be left in its place.

The player never actually encounters the Hooked Doll during her active phase during their first visit to the Root Cellar. Instead, she only becomes active upon the player's second visit when retrieving the Black Candles for the Kira Genesis Ritual.

During the second visit, The Hooked Doll will appear in a random spot in each room and not move until the player looks in her direction, obstructed or not. The screen will be covered with TV static and cause her to charge and deal damage. She moves at about the player's walk speed when indirectly looked at and faster than the player's walk speed when directly looked at. Thus, the player must find all three Black Candles while avoiding looking at her. She will also switch positions every 10 seconds.

The Axe can be used on her, although to little effect as it only slightly pushes her away.

When the player collects all three, attempting to leave the Root Cellar will not send them to the staircase, but instead, it will be replaced with a long, empty corridor lined with broken doors. After walking for long enough, a door will appear at the end, which will bring the player to the West Wing.

If hit while charging, the player will take about 20 damage, but if the player touches her without looking at her, she will slowly drain health. With her charge attack, she can kill the player in five hits at full health.

Avoiding Hooked Doll can be somewhat simple. Avoid direct eye contact and find the candles. If the static overlay appears, quickly look in another direction. If health starts draining from touching her, move away before it can do too much damage. She can easily kill the player if they're unlucky enough to have her spawn in the same place the player's looking at multiple times.

As for the candles, there's one in the landing area to the Root Cellar from the GL Labs Area, one in the room where Hooked Doll is found in her dormant form, close to her position, and finally one behind the Pinwheel Door. After retrieving them, book it to the exit door.

"A "wicked nasty" child was thrown into a pit.

No food, light or water was ever given to it.

Punishment was dealt, without mercy or hesitation.

As if justified by faith, or ownership from creation.

It was no righteous act, it was hellish, demon sent.

Eventually all will find out, in eternal torment."

After the text disappears, a sharp, curved blade will be thrown at the player's face. This will repeat three times as the screen turns redder with each hit. After the third blade, the player collapses and dies. 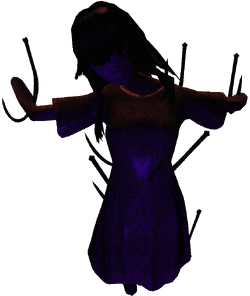 She now has a fully 3D model, and a face.

She is now much faster when the axe is used on the sculpture, and now has a delay before charging at the player in the vision. She has new music for when she's active in the Root Cellar and Endless Mode. The static intensifies the closer the player is to directly looking in her direction. However, if the player is far away enough from her, she can be looked at without her moving or creating static.

She can now appear in Endless Mode after the 2021 Halloween Update. Her starting room resembles the room she's located in the Root Cellar, although more maze-like. The player will enter this room through a regular door, which will then be locked after entering. To exit, the player must find the Hooked Doll and take the key she's holding. Be careful, because as soon as the key is taken, she will be active and immediately attack the player if they don't look away fast enough.

When being chased by Hooked Doll, the player will be surrounded by a blue fog that heavily reduces visibility, even more than Monster 5's fog, and have an old film grain overlay on their screen. She now deals 15 damage instead of the 20 damage she deals in the DLC. It is recommended to quickly look away from the center of the screen when entering a new room as the Hooked Doll can sometimes spawn directly in front of the entrance door.

Close-up of Hooked Doll in the HD Renovation.

A map for Hooked Doll's starting room in Endless Mode.
Community content is available under CC-BY-SA unless otherwise noted.
Advertisement