Husks look like broken baby dolls. Their legs are darker than the rest of their body and the bottom of their head is broken off, leaving an open bottom jaw. Part of their head is gashed in blood and their chest is cracked open.

Later, they are encountered in an inactive state in the Great Hall. Twelve Husks are placed in front of the Electric Barrier by Spooky after the player obtains the GL Labs Area keys from the Doll Hands. The player must put the Doll on the pedestal in the room in order to turn on the barrier, which will activate the Husks and let the player exit the area.

Husks can be killed using the Axe. Husks will be stunned for a brief moment after being struck with the axe, and they will strafe away from the player after being attacked. After 3 to 5 hits, it will turn into a glob of doll on the floor, which can be hit with the axe.

They deal 15 damage with a half a second cooldown.

When killed by a Husk, the screen turns to static, which will soon reveal the Husk's face, with the text:

Scarlet burning holes are placed into the skin

and flesh rebound into an unfamiliar form.

Molded into something new, the husk reshaped

into a skin more accepting of the howling void.

Husks are relatively slow but can easily overwhelm the player in numbers. They can be walked through so they can in turn deal some chip damage to a player rushing through the Doll House. 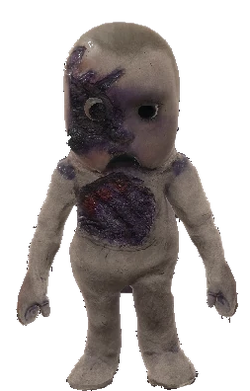 The Husk now has a fully 3D model, albeit much less detailed and less red compared to the original. They also have eyes that look around randomly.

They take a lot more knockback when hit with the axe and do not try to strafe away. They will get bloodier with each hit.

Unlike in the original, inactive Husks cannot be pushed with the axe. Their globs will sometimes leave a pool of blood but they cannot be hit.

Husks have their own starting room in Endless Mode. The entrance to the room resembles the Doll House First Floor area in the DLC. Right next to the door, there's a doll (not to be confused with the Healing Doll) that the player can pick up and is remarked to be quite heavy. This doll has to be brought to a pedestal found at the end of the hallway. In this small section, a group of inactive Husks are blocking the pathway leading to the exit which is in front of an electric barrier. The player will put the doll on the pedestal in order to activate the electric barrier, which will cause the Husks to become active. The electric barrier will fry shortly after and the chase will begin.

Husks appear in large numbers when chasing. They can appear either in their glob state or active. The globs can be killed, which will result in them flattening as they spit out a yellow substance, and in doing so will effectively remove that Husk from the chase. Sometimes these globs will burst into Husks when getting too close and flash the player with a yellow screen. Killing all of the Husks will end their chase.

Although the Husks can be dispatched easily, they have a chase duration from 30 to 49 rooms. It may even prove beneficial to keep one Husk around as it doesn't pose much of a threat on its own and they have a high chase duration, meaning they can take the space of another stronger chaser. It is worth noting they can block the player's and some corporeal Specimens' path in their glob state. 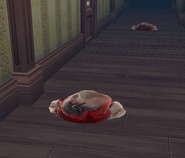 Globs of Husks which were killed with the Axe in HD Renovation. 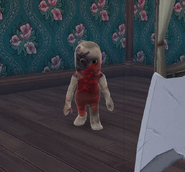 A Husk, injured with the Axe in HD Renovation.

The 12 inactive Husks in the Great Hall.

The Husk's death screen, without static or text.

The starting room of the Husks in Endless Mode.

The doll picked up by the player.

The active Husks after placing the doll on the pedestal.

Globs being struck with the Sword.
Community content is available under CC-BY-SA unless otherwise noted.
Advertisement