This page contains information on all of the rooms found in the Karamari Hospital DLC on how to traverse them and points of interest found within them.

This is the main area the player will appear in upon entering the hospital. The door behind the main desk leads to the offices. To the left, a hallway with doors leading to bedrooms, a stairway and another hallway. To the right, the bathrooms, and only the men's bathroom can be accessed.

The only save point in the entire DLC is also located here, in the form of a drinking fountain.

The first hallway has multiple doors leading to hospital bedrooms, one of them containing a note. Walking straight down the hallway leads the player to the staircase going into the basement. Taking a right shows some more doors and an electrically sealed door that leads to the second hallway. This door can be opened after turning off the generator in the basement.

The second hallway has a more otherwordly look. Monster 1 will be blocking the stairway leading down into the other part of the basement the first time the player goes into the second hallway. Here, there are two unique hospital bedrooms.

There's a side room in the hallway where Monster 1 is found. In this room, there is a bed in the middle of the room with blood flowing from the bed to the ceiling. The pleading screams of a man can be heard while the player is in this room.

Along with the Blood Bed Room in the second hallway, the player can find a room devoided of all furniture except for a single red armchair that when sat on will start the Scare Chair's sequence.

Accessed through the stairs, this floor contains four distinct rooms: The Break Room, where a note and the office key can be found; The Maintenance Room, which contains the generator that must be powered down in order to progress through the rest of the DLC. The Virus will be blocking the other side of the basement, which contains the Morgue and Isolation Room.

After the generator is powered down, the dim white fog will turn slightly red for the rest of the playthrough, and the player will be able to access the second hallway, where the stairs leading to the other section of the basement is located, which will be blocked by Monster 1. He will move out of the way once the player goes into a different room and comes back. 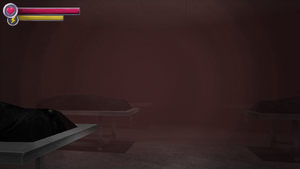 The Morgue rooms each hold several body bags, with one of them containing the badge needed for one of the offices and the other containing the acid bottle, used to kill The Virus. Once the player retrieves the badge and then exits, they will enter a room with body bags scattered around. Monster 2 will then start chasing the player.

The stairs are accessed by using the badge obtained from the Morgue in one of the office rooms. When the badge is placed on its frame, a wall will start to raise, revealing the staircase. While going down the stairs, the player can hear creepy groans following them, with viscera laying on the steps. Before reaching the end, the player can see blood on the walls.

After going down the staircase found in the Office area, the player will arrive to a laboratory. The key to the Isolation Room can be found there, in the top-rightmost room, and the Sunshine Academy minigame, in the bottom-leftmost room. In the top center of the area, an endless hallway can be found.

After the key to the Isolation Room is retrieved, Monster 4 will start to chase the player and will cease once the player leaves the laboratory. Monster 3 occasionally appears in the T-shaped hallways when Monster 4 isn't chasing the player.

The Isolation Room (located in the basement) consists of three areas: a small corridor with wards containing two notes about the hospital, Monster 5's maze and the exit key/Demon Child room.

The exit key room is found at the end of Monster 5's maze. The room is small and contains one note about Spooky's past and the exit key in the first playthrough of the game. Additionally, through one of the darkened glass window found here, the Demon Child can be seen.

In New Game +, it is possible to encounter a different instance of the room if the player gets the Sword and kills all enemies (apart from Monster 6, who cannot be killed). In this instance, the Demon Child has a different reaction to the player and a new note talking about Spooky's origin can be found instead of the original note.

An area that was added in the July 4th, 2016 update. During the first portion of the DLC, this area is inaccessible. When the door is interacted with, it will display a message claiming that the door looks fake. This area can only be accessed after the player obtains the exit key from the Isolation Room. At this point, the door will look real and the player will be able to open it.

An endless set of hallways filled with randomly locked and open doors to the sides. If the player enters one of the side rooms, they will enter into a room sometimes with furniture, sometimes empty and at other times large.

In the HD Renovation, the door never looks fake like it does in the original game. However, the game states that it looks fake.

The drinking fountain (save point)

One of the bedrooms.

Ditto, after the generator is turned off.

The door to the stairs.

The stairs leading to the basement.

The stairs leading to the basement in HD Renovation.

The acid bottle, located in the morgue.

TV with static in the lobby after the generator is turned off.

The entrance door to the Deformity Wing in HD Renovation.

Inside the deformity wing, facing towards the exit.

TVs near the exit door.

Monster 6 in the endless hallway.

Map of the Secret Laboratory.