Karamari Hospital is the first DLC for Spooky's Jump Scare Mansion. The DLC was first revealed on November 8th, 2015 [1] and was originally slated for release on December 29th, 2015. On December 30th, 2015, AMGSheena announced on Twitter that the DLC is still waiting for approval by Steam's server. A few hours after that announcement, the DLC was released publicly on Steam.[2]

According to the update provided on Steam, players will enjoy an additional 45 minutes to 1 hour of new gameplay, featuring two new monsters and a new explorable area. [3] The DLC is separate from the main game, using its own executable file, and the player starts in room 995. Also, none of the previous specimens will be present.

It has also been revealed that Matt from "Two Best Friends Play!" will be a guest voice actor. 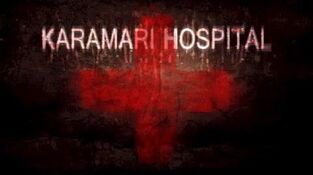 Karamari Hospital is included as part of the game in Spooky's Jump Scare Mansion: HD Renovation.

4. For those with HD Renovation, New Game > Karamari Hospital.

The DLC mainly takes place inside of the titular hospital. The first room the player enters is a reception area, where a drinking fountain can be used to save the game. Other areas that can be accessed include bathrooms, the patient's rooms, and offices of the doctors. Monster 1 is encountered here.

There is also a basement that is host to a break room, a maintenance room, a morgue and the isolation zone. Various fleshy growths seem to have sprung up around the hallways of the basement. Monsters 2 and 5 are encountered here.

The deepest area of the hospital can only be accessed by way of a hidden stairwell which is behind a wall in one of the offices. A green fog permeates the area and strange, warm liquid can be found on the walls. Monsters 3, 4 and 6 are encountered here.

An update on July 4, 2016 adds the minigame Sunshine Academy and new section of the hospital called the Deformity Wing. At first, the door seems to be spray-painted on, but finding the key to exit the hospital also causes the door to materialize. The wing itself is fleshy and surreal and seems to continue endlessly.