Minigames can be found throughout all of Spooky's Jump Scare Mansion.

In Story Mode, there's a special room that contains three playable arcade machines and a fourth one that will show a cinematic if the player inputs a password.

In Karamari Hospital, the minigame Sunshine Academy is located in the bottom-leftmost room of the secret laboratory. The game is played on a handheld console called the 'Honey Boy', which resembles a Game Boy Advance.

The minigame Doug is found in Spooky's Dollhouse. It appears in the GL Labs Area, the first room to the left.

Mall of the Spook

In Mall of The Spook, the player controls Spooky, moving her up and down in a long hallway while stabbing people with her knife to fill a constantly draining health bar. The health bar will drain faster as the player progresses, and the speed of the game increases. When the heath bar runs out, the player will be presented with the "GAME OVER" screen.

Press Enter/Space/E to stab, and either WASD or the arrow keys to move.

At the high scores screen, any name typed in will instantly turn into SPOOKY.

Also, notable is the fact that while Spooky appears to slit the throats of female NPCs, the heads of any male NPCs seem to explode.

Mrs. Spook is a Pac-Man-esque game where the player controls Spooky and must catch a character resembling Pac-Man.

The player controls her movement with WASD or the arrow keys.

When Spooky (the player) touches Pac-Man, a large nail flies from off-screen, impaling Pac-Man while a death rattle loops in the background. Allowing Pac-Man to eat the pellets does nothing.

Spooky Kart is a 3D racing game in which the player, presumed to be Spooky, must catch up to other racers and crash their cars to earn time bonuses. The game ends when the timer runs out. This minigame is only available from Room 500 onwards.

The player's car is a Marauder military truck while the other cars are all Reliant Robins. Upon crashing into another car and having it explode the announcer will say one of four things: "Nitrous!", "Checkpoint!", "Killer!", and "Crime doesn't pay!".

For acceleration, press the W or the Up arrow key. To steer the wheel, press the A and D keys or the Left and Right keys. To brake, simply press the S or the Down arrow key.

Sunshine Academy is a dating sim/visual novel with purposely poorly written dialogue, grammar and spelling where the player interacts with a character named Ume Ito.

There are two endings to this minigame.

The first ending, the "bad ending", is done by going through the game normally. In the beginning, there will be normal dialogue, but as the player progresses through the visual novel, the dialogue will get creepier. On the third day, Ume looks deceased and the player has assumingly murdered her after following her home on the second day; this marks the bad ending after the player picks from various repulsive comments. The next day (no speficic number as the number constantly changes), Ume says various lines of dialogue while her facial features slowly fade out along the sounds made by the appearing text, marking the ending of the minigame. Certain dialogue options and events will change with each subsequent playthrough, but the ending is always the same.

In order to get the second ending, the player needs to reach the bad ending a couple of times. To do so, they must play Sunshine Academy three times. On the third playthrough, on the second day, Ume will ask the player if they wanna walk to her street together. The player must decline the offer. If the player doesn't decline, the gameplay won't change and they won't be able to get the second ending. After this, there will be a third day on the school with Ume alive but will appear dead on the fourth day instead. Finally, on a fourth playthrough, at the beginning, questionable dialogue options will appear. The player must continually pick these dialogue options until Ume reports them to the school and escapes, and the "good ending" (LOVE FAILED!) is achieved.

Doug plays similarly to Dig Dug, however the obstacles are ghosts and skeletons. The player can acquire power-ups: The gun power-up increases damage dealt against enemies and lets them destroy terrain and rocks if able; The ammo power-up increases the rate of fire. As the player goes deeper (shown by the fathoms on the top-right corner), it will get darker to the point the playable character, Doug, will start using a flashlight.

The player controls Doug's movement with WASD or the arrow keys, and Enter/Space/E to shoot.

The player gets three lives. Each time they die, they lose all their upgrades, shown in the top-left corner. Progress is represented with cake and cake slices, seen on the top-right corner.

When the player runs out of lives, the game over screen with the text "RIP IN PEACE" pops up, read by the S.A.M. (Software Automatic Mouth), with Doug's bloody corpse below it, before a music note plays. The high scores screen will appear after.

Instead of the minigames being an overlay on the screen, they are pre-rendered in-game, with Sunshine Academy acting similar to when the player picks up a note. The arcade room can be found in Endless Mode, too.

Achievements have also been added for the arcade machines and Sunshine Academy.

The cabinets have also been updated with 3D joysticks that move when the player plays the minigames and new art for the cabinets. All three arcade machines are available from the start, meaning the player can now play Spooky Kart before Room 500.

Mrs. Spook now has a title screen, showing all the ghosts including Spooky, similar to that of classic PAC-MAN. The player can lose now if they let Pac-man get all the pellets.

In Mall of the Spook, the blood meter now shows the player's score. Entering the name Spooky in the high score screen, though, causes Mall of the Spook to glitch out and renders it unplayable, showing the text "ERR".

Spooky Kart now has a counter how many cars are left and when all other cars are destroyed the game ends and cannot be played again.

For Sunshine Academy, most of the spelling and grammatical errors have been fixed and the text font has been changed, which is hard to read if the player has a high FOV.

Ume Ito's entire body slowly fades away instead of just her face on the unknown day.

Dying will not get rid of the player's power-ups. On the game over screen, Doug's corpse doesn't appear. There's also no high scores screen. Upon dying, the player will earn the Doug Dug achievement.

Gameplay of Mall of the Spook.

Game over screen for Mall of the Spook.

Mrs. Spook in the HD Renovation.

Mall of the Spook in the HD Renovation.

Spooky Kart in the HD Renovation.

Secret Mall of Spook "Error" in the HD Renovation. 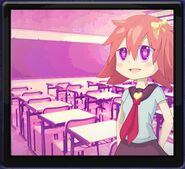 Some dialogue in HD Renovation.

Sunshine Academy in the HD Renovation.

The arcade machine for Doug.