These are entities that the player can encounter throughout the main game, Karamari Hospital, and The Doll House, that are not considered Specimens, since they do not show up on the CAT-DOS, yet are still considered enemies as most of these creatures can harm the player. They are only encountered in very specific rooms.

These immobile shadows appear in the Japanese classrooms at Room 165.

They all resemble the shadows of both male and female children.

The Class Shadows will only appear if the player shines the flashlight at them. They are harmless unless the player walks into them, in which case they deal 20 damage on contact, and can be avoided easily if one knows where they are.

The Violent Deer are enemies that only appear in Rooms 552-556 and Specimen 8's chase sequence in Spooky's Dollhouse.

At first glance, and from a safe distance, these creatures resemble perfectly normal and docile fawns, peacefully grazing among the foliage and occasionally stopping to look around. While they seem harmless at first, when the player approaches them, the deer will charge at them with a growl, showing a mouthful of long sharp fangs.

The player must either escape them by making it to the door or kill them with a single hit from the Axe. They can sometimes jump scare the player with Specimen 8's face when they attack or get killed.

The Violent Deer deals 20 damage with a cooldown of two seconds.

In the HD Renovation, the deer have full 3D models and ragdoll physics when killed.

The Violent Deer appear during Specimen 8's chase sequence in The Doll House.

Howard is a harmless minor enemy found in a randomly generated room in the base game.

Howard appears to be a tall humanoid figure with no pupils or visible mouth. It is a color similar to bronze, hence its unofficial name. It wears no clothes, is bald, and has a body shrouded in darkness.

Howard is encountered in a randomly generated room referred to as either Howard's Room or PT Room. When entering the room, the player will be presented with a short hallway. Walking down the hallway will lead to a small room with a locked door to the left and 2 tables with a note on one to the player's right. The room continues down another hallway where the room loops until the door is unlocked by looping 3 times and reading the note on the table. Howard spawns at random times when looping the room. It will "run" at the player with a bellowing screech, temporarily turning the screen black.

In the HD Renovation, Howard will not appear if jump scares are turned off.

Wolfgang Amadeus Mozart (A.K.A. W.A.M.) is a dark figure that appears in Room 557 behind the player after the record player stops on its own.

W.A.M. is human-like figure shrouded in darkness. It wears no clothes, is bald, has no visible mouth, and has gray pupils.

In HD Renovation, W.A.M. will instead disappear when the player is close enough to the record player, and reappears when they walk away.

Carl is a minor enemy encountered in the Karamari Hospital DLC for Spooky's Jump Scare Mansion.

Carl is a small insect-like creature with a grey, segmented body, similar to that of a centipede. Carl's face is pale white with grey features. His eyes are closed and his mouth is open with a grin. He is also wearing a red tie.

In the bathroom, there will be a stall with a sign reading, "Out of order." Normally, this door is locked. However, in New Game +, the "Out of order" door can be opened. Inside the stall, there is a bloody toilet. Flushing it will result in Carl coming out of the toilet, screaming for a few seconds, and then disappearing.

In his early life, Carl was salesman of the year for his high sales of the Thunderstrike Volcano Mixer. Come to find out it was actually a vacuum with serrated blades inside, making it very difficult to remove processed food bits. Sadly, he was fired for misconduct when his boss found out he was smuggling large amounts of centipede eggs into work and hiding them in the ceiling. Carl's current occupation is a plumber.

The Virus is an obstacle encountered in Karamari Hospital, located in the Basement.

The Virus appears in the corridor connecting the morgue with hallway featuring the maintenance room and break room. Its main role is to prevent the player from entering the morgue without turning the power off. Hitting it with the Axe will cause it to pulse faster for a while. Interacting with it will display the message: "I can't get past it".

Destroying The Virus allows the player to bypass Monster 1's hallway. In HD Renovation, Monster 1 stops appearing after The Virus is killed.

The Scare Chair is an object that can be interacted with in Karamari Hospital. Its room can be entered after the generator has been turned off and going to the second hallway.

The chair is a stained, crimson armchair. It has no other remarkable features besides the figure that appears on it.

The specter itself is a semi-transparent, black humanoid creature with no notable physical features. It's in a slumped position, staring at the floor.

Ambient music will begin to play after prolonged sitting. Hypnotic particles arise from the ground as the room becomes darker. A blood trail stretching from the door to the Protagonist will gradually appear. When the trail becomes fully visible, a humanoid, pale face will fade in and out of sight around the screen. After 3 minutes have passed, the Protagonist will be forced out of the chair.

From this point onwards, a shadow will be sitting in the chair, preventing the protagonist from sitting back down. However, it can be killed with the sword, allowing the protagonist to sit in the chair once again. Upon doing so, the screen will begin to violently shake and eerie screams will play. Soon after, the Protagonist is killed and an image shows up with text reading:

"You awake in a wasteland not meant for you.

The ground underneath you screams.

The sky above violently pulls you.

And the air around you presses down,

trying to worm its way in."

The Scare Chair can be seen during the Nightmare Sequence behind the player's starting point. It can't be interacted with.

The Brain appears in the base game, but in Spooky's Jump Scare Mansion: HD Renovation it can be interacted with.

The Brain appears submerged in a glass tank full of water in a randomly generated room.

In HD Renovation, if the player has the Axe or Sword and hits the tank twice, the glass will break, The Brain will be released from it and will instantly kill the player.

Nightmares are minor enemies that are introduced in Spooky's Dollhouse. They appear in the area after deactivating the Spirit Seal.

The Nightmares appear to be red humanoids made of flesh and bone. Their bodies are highly warped and disfigured, giving them an inhuman, almost alien-like appearance. They wear military helmets and have a heavy machine gun fused into their torso.

After deactivating the Spirit Seal the player will be sent to a series of orange-tinted rooms and corridors. After obtaining the Rifle from a nearby wall, the player must roam around the hallways, firing at any Nightmare that comes by. The Nightmares will attempt to ambush the player from the darkness in different directions, emitting a screeching noise to indicate their attack. When they appear, they must be shot with the rifle to either kill or deter them. They all die from one shot. The nightmares will typically ambush the player in open rooms, and appear very frequently throughout the area.

In the HD Renovation, they will only appear one by one, and will instead take from one to three shots to die. They also disappear on contact with the player.

Clicky is a doll encountered in two specific rooms in the Spooky's Dollhouse DLC. She is first found in the room to the left of the Clock Room on the map, in Northside Studies. In the first room, she's climbing on the ceiling, constantly shaking her head, following the player's movements and making a clicking sound as she does so, hence her name. Aside from this, she never attacks the player nor follows them outside the room.

Clicky is encountered once more in the GL Labs section of the Doll House, in the room in the third door on the left of the entrance. This time, she is encountered underneath the metal plates on the ground. She still follows the players movements under the floor, and still makes the clicking noises when moving.

In the HD Renovation, she's fully 3D and her head moves when she moves.

Carl's clear view inside his toilet.

Out of order door.

The bloody toilet from a different angle. 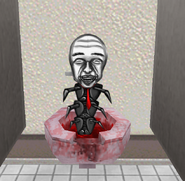 Carl appears from the bloody toilet.

Carl in the HD Renovation

The Virus as it appears in the HD Renovation. 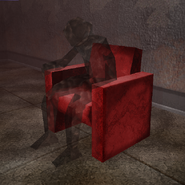 The specter sitting on the chair in-game.

The protagonist sits on the chair.

Hallucinations that occur if sitting for long enough.

The hallucinations in HD Renovation.

Close-up of the Brainframe in Spooky's HD Renovation.

The brain attacking the player.

Clicky on the ceiling.

Ditto, in the HD Renovation.

Clicky under the metal plate floors in a room in GL Labs in the HD Renovation.
Community content is available under CC-BY-SA unless otherwise noted.
Advertisement