Monster 1 (A.K.A. Security Guard) is the first monster encountered in the Karamari Hospital DLC.

Monster 1 wears a blood-soaked security guard outfit, a black necktie, and black shoes. His eyes are missing, a dark discoloration surrounds the sockets, and he lacks a mouth. His most prominent feature is his arms, which are hideously swollen from the elbows down with no visible hands or fingers.

Monster 1 appears past the sealed doorway after the power has been turned off. At first, he stands motionless, blocking the stairway. However, he will start to move if the player enters one of the side rooms and re-enters the main hallway.

Swinging the Sword at him six times will successfully kill him. He will not respawn even if the player leaves and re-enters the room. It is possible to kill him when he's blocking the stairway.

In HD Renovation, killing The Virus with the sword will kill Monster 1 as well. Monster 1 does not have a hurt or death sound in this version.

He will slowly wander around in a seemingly random pattern and, if the player gets too close, he will slowly turn towards them. 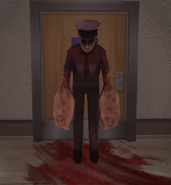 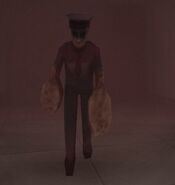