Monster 5 (A.K.A. Ghost Cow) is the fifth monster encountered in the Karamari Hospital DLC.

Monster 5 resembles a bull with wrinkled, hairless skin. The creature has a wide grinning mouth, crooked black horns, and small unblinking red eyes. The legs are bent downward at the knees as if they are broken, and it has no visible tail. The monster's most prominent feature however, is that it is hanging upside-down by a long scrap of flesh connected to a levitating mouth, which contains a single red eye which is filled with sharp teeth.

Monster 5 is encountered while going through the maze to the Isolation Zone. It does not fluidly move, but instead, it constantly teleports very short distances ahead, although it also occasionally teleport much farther distances. It moves faster than the player can walk, so conserving stamina during its brief chase is strongly recommended when the player navigates the maze. This monster cannot teleport through walls.

It deals 20 damage to the player's health with a 2 seconds cooldown.

Monster 5 can be killed if the Sword is swung at it multiple times. Unlike with Monster 2, the player will not be teleported out of the maze.

When the player is killed by Monster 5, its death screen presenting appears, presenting a brain and text that reads as follows:

"Your fear allows me to enter your mind.

Your obligation allows me to control your hands.

Your reason allows me to break your eyes.

Your guilt allows me to loosen your neck.

Your expectation allows me to hide the truth.

Your tendencies have allowed me to make you"

Monster 5 appears in the main game's Endless Mode, regardless of whether or not the player has the Karamari Hospital DLC. During its chase the rooms begin to resemble the Isolation Zone maze from Karamari Hospital and a red, hazy effect overlays the player's vision, along with a thick, black fog that surrounds the player.

Unlike in the DLC, it goes through walls. Looking in the direction of the monster causes the screen to flash red, accompanied by glitchy sounds, similar to Unknown Specimen 1. It will now deal 30 damage with a one second cooldown.

Monster 5 now has animations. The colors of its eyes are more pronounced and are unaffected by room hues.

In Endless Mode, Monster 5's fog is now smoother-looking and animated. The red ring surrounding the player's vision no longer flashes red. Instead, a second ring closes in and out of the center of the screen. It also no longer covers the health and stamina bars or the room counter. The screen no longer flashes red when looking at it, and the glitchy sounds will occasionally emanate from Monster 5 itself.

It now makes a clanking sound instead of the regular damage sound and deals the same amount of damage (20) on both Karamari Hospital and Endless Mode.

Monster 5 is noticeably slower than it was in the original Karamari Hospital, likely to compensate for the player's slower movement speed. It no longer teleports or phases through walls, instead just hovering after the player.

Monster 5 has its own starting room, which resembles the Isolation Maze area from Karamari Hospital, albeit shorter and less maze-like.

It will phase through the door when it enters a room and floats over pits. Its speed is also increased, going slightly faster than the player's walking speed.

Htting Monster 5 with the Axe or Sword causes it to teleport to the beginning of the room, accompanied by the screen flashing blue. Every time Monster 5 is hit, a room will be deducted from its chase duration. If it's hit and there are no more rooms to deduct, it will disappear from the room and it won't return in the next room, ending the chase.

It can prove beneficial to keep Monster 5 around, as its iron bar walls can let the player see through them, allowing to find an exit faster or keeping track of teleporting/incorporeal foes, such as Specimen 4 or Unknown Specimen 1, in exchange for reduced view distance, although the black fog can make the table in the abyss room impossible to see from a safe distance.

Monster 5 in the maze. 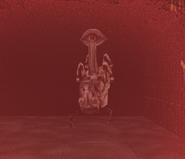 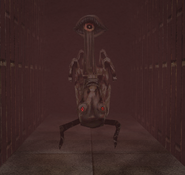 Monster 5 in the HD Renovation.