Monster 6 (A.K.A. Bekka) is the sixth monster encountered in the Karamari Hospital DLC.

Monster 6 appears as a tall, pale-skinned woman. She has a long smile that almost stretches across her entire face, long black hair, and no eyes. She wears a black, floor-length gown with a darken red pattern on the front that resembles innards. Her hands are black and featureless except for her fingers, which are covered with red blood.

Monster 6 is a secret monster encountered while going down the endless corridor in the laboratory in the DLC's New Game +. If the player walks down the corridor for a long period of time, she will slowly appear at the end. Once the player character is close enough to her, she will immediately rush towards them and kill them, displaying the following message on the death screen:

"Don't get up before Saturday."

Monster 6 appears in the main game's Endless Mode, being one of the many creatures who can randomly engage the player character in a chase. During the chase, a dark, foggy overlay limits the player's vision.

Monster 6 deals 30 damage to the player with a half second cooldown. This makes dead ends and head-on collisions with her very hazardous as she can also phase through walls and moves at a similar speed to Specimen 4.

She now has a fully 3D model only present in Endless Mode; she still uses her 2D sprite in Karamari Hospital.

Her Endless chase has been reworked.

She has her own starting room which looks similar to where she appears in the Karamari Hospital DLC. The player will have to go down the "endless hallway", that now has a regular door at the end. She may or may not appear at the door when the player approaches it. After crossing the door, the chase will begin.

She now appears randomly at the exit door, and will slowly approach the player when they get close. She will chase the player for a few seconds before disappearing with the screen flashing black.

It is possible to avoid her damage completely by getting very close to the door and retreat right after she spawns. She sometimes does not spawn and only spawns from one door per room, meaning rooms with multiple doors can give players a higher chance to avoid damage. She is immune to both weapons. Her original overlay was replaced with a fog overlay.

Monster 6 as seen in Endless Mode.

Monster 6 in the endless hallway. 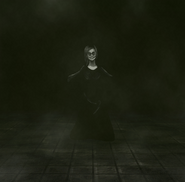 Old Monster 6 in the endless corridor.

Monster 6 charging at the player in HD Renovation's Karamari Hospital.