Along the many rooms in Spooky's Jump Scare Mansion, the player will often find notes containing important details regarding the mansion, such as stories of the victims having succumbed to the darkness of the manor, or sometimes, the origins of certain Specimens and other sinister events.

These notes can be found randomly while traversing the non-scripted, regular rooms of the mansion, located on top of tables, drawers or attached to Specimen 1. They can also be found in the Elevator Room. They are written by three different victims of the mansion. Reading/interacting with the note will allow the player to progress to the next note. The note order always starts with the first note of the Romantic Victim and ends with the Survivalist Victim's last note.

The notes found in these rooms are always present. They are usually written by past victims or witnesses of the Specimens, although they can be found as a poem (in Room 60's case) or backstory of the Specimen (Room 310)

Notes found throughout the entirety of the Karamari Hospital DLC. Similar to the scripted notes, these are always present, with the exception of the 10th note which varies depending on the ending the player gets.

Most notes are written by hospital staff that are being terrorized by who is believed to be Monster 5; both versions of the 10th note, however, are written by Spooky's Father.

Similarly to the notes found in randomly generated rooms in Story Mode, the player can find more notes in Endless Mode, once again being written by victims. Notes written by an Specimen while in their chase, Unknown Specimen 5, and Spooky herself are also present.

They follow the same progression rules as the Story Mode notes, starting with the first note of the Romantic Victim's second appearance and ending with the last of Spooky's notes. Unknown Specimen 5's notes do not progress and are shown in a random order attached to a faded Specimen 1.

Once again, these notes are always present. Some notes are written by Generic Labs Assistants and some of the Dolls/subjects, like Woormy Charles. More notes written by Spooky's Father can be found here; one of these notes is not exactly a note as it is found when interacting with his corpse in the Seal Chamber. One of the notes found in the Root Cellar will display fully only when the player goes back for the Black Candles for the Good Ending of the DLC.

Unlike all the other notes in the game, the notes here are written with a different font, known as Cartridge, and the text is purple instead of black. Exempt of this rule are Woormy Charles's note, as it is just an image, and the dad's corpse's text. 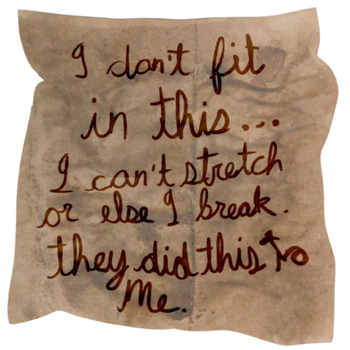 This note can only be found in Howard's Room, a room that appears in both Story Mode and Endless Mode.