Throughout the game, the player will find themselves in many scripted rooms; some with save points that can help them save their progress, and others that will present them with hostile Specimens. There are also rare rooms that contain Easter Eggs, decorative features, or some interactive objects such as notes.

In the gaps of normal rooms between scripted rooms, the player may randomly encounter Specimens.

Here is a list of the many things and variations one can find in the regularly generated rooms. Walls, ceiling and ground textures may vary per floor, alongside the kind of rooms the player can find in each.

For the HD Renovation, there are multiple rooms with vertical/diagonal movement in the form of ramps and staircases. There are also new room types for the first portion of the game, and some bedrooms have windows with a view of the night sky and sometimes rain.


There's a mechanic in the HD Renovation related to room generation known as the troll generator, where the same room layout is repeated 4 times. 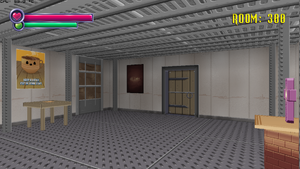 Elevator Rooms serve as save points in Spooky's Jump Scare Mansion. They have two tables, one of which will have a save point on it and the other a candle and sometimes a note. There can also be up to two elevator posters on the walls of the elevator.

The player needs to press the button on the opposite side of the room to make the elevator go down to the next floor to progress the game.

The elevator will only appear every 50 rooms up until Room 200. After that, it will appear every 100 rooms. It will also appear at Room 995. In Endless Mode, after Room 1000, it will only be present after 200 rooms (This does not apply for the HD Renovation).

Although rare, the player may sometimes stumble upon one of these rooms. Compared to regular rooms, these rooms offer much more interactivity and players can find easter eggs if they decide to spend more time in them.

These rooms are also considered safe rooms, as specimens will not chase the player through them.

A room containing four arcade machines, three of which can be played and another one that needs a password to access it. 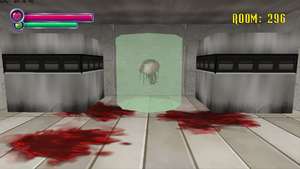 This room contains a brain inside a giant glass jar connected next to some machines and blood puddles. Inspecting the glass container from Rooms 900 forward will reveal a password saying: 1235. Using this password in the out of order arcade cabinet will present a short story.

In Spooky's HD Renovation, if the player hits the glass twice with the axe, the tank shatters and The Brain will drastically slow the player's movements before approaching and killing them, which results in a game over.

A computer room that contains a database describing Specimens 1 to 13. 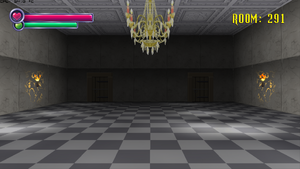 A very rare room with a chandelier hanging in the middle and a shiny black and white ceramic floor. 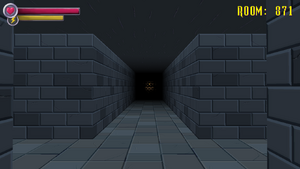 A room with three directions. To the left is a door, and to the right is an empty room. Going forward initiates a looping hallway that slowly closes in as it continues deeper. Eventually the player will become stuck, and shortly thereafter Specimen 9 will come and kill the player with an instant game over. 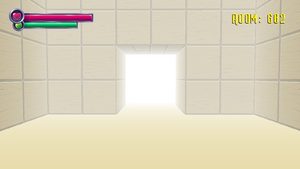 An illuminated room that uses trial and error as its puzzle's source. After entering the main area, the player may go left, forward or right. It requires four correct choices in a row to complete it and proceed to the next room. It is worth noting it is a "safe" area, as no specimen keeps chase in these areas, allowing one to rest momentarily.

If the player chooses the correct direction, it will be indicated by a piano note, if the player is going in the wrong direction an acoustic guitar sound will play. The text reading "Ding" (correct) or "Donk" (incorrect) pop up at the bottom of the screen in the HD Renovation.

If the player makes an incorrect choice the rooms will reset and they'll have to begin again. The correct turn combination changes each time the maze is encountered.

As the Foggy Maze does not function with entirely randomized paths (this doesn't apply for the HD Renovation as it is randomized), there are six different predefined paths:

This room is most likely an homage to the famous "Lost Forest" style puzzle popularized by The Legend of Zelda. 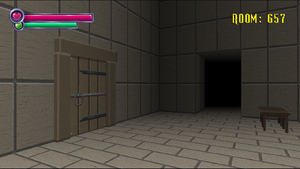 A room composed of a locked door, some small tables, and a turning hallway ahead. Going down the hallway will make the room loop. After two loops, a note will appear on one of the small tables, reading:

"This was such a surprise.
That there could be another entry.
Another actual entry.
One I could admire.


But then as suddenly as it came, it left.


And now you disband.


Your influence and inspiration will never leave me."

Occasionally, after one to three loops, Howard will appear in the room, rushing at the player while roaring. Howard will then disappear, and the player's screen will black out momentarily. In order to leave this room, the player must loop 3 times, pick up the note on the third loop and the door will unlock.

In the HD Renovation, the exit door is comically narrower and taller, giving the illusion that it gets thinner each time the player passes by it. The player will also have a dim static overlay effect while in this room that appears to be the same effect when Specimen 8 chases the player. 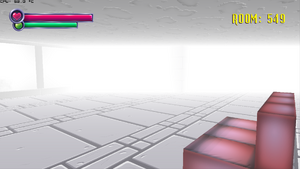 Composed of an armed couch and a table, a view of an apparently snowy outdoor with some bushes, this room covered with a white fog hosts 4 different portraits of some YouTube Let's Players that first played the game before it became popular. 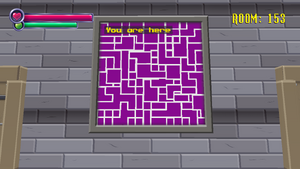 A small T-shaped room with a large purple map stating "You are here" with a convoluted screen full of moving rooms, with a door on each side of the map. 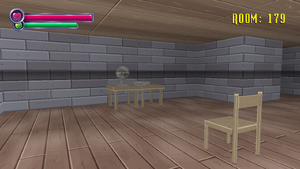 A room with a desk, a fan and a telephone. After a few moments, a female voice (AMGSheena, one of the devs) will speak, saying "Hello" in different tones, and on occasion, tells the player not to look directly into the fan.

The room is a direct reference to the various 'office' locations from the well-known Five Nights at Freddy's game series, all of which feature a fan and a desk with lengthy phone calls in the game.

In Endless Mode, the layout of most of the rooms seems to be more maze-like and narrower, with very irregular turns, limiting movement, making it easy for certain Specimens to catch up to the player. Aside from the previously mentioned room types, some room types are reused from Story Mode, with new variantions being added alongside new room types, such as:

In the HD Renovation, more room types and variants are added.

A room with acid pools.

A room with some cells.

A random skull in one of the rooms.

A room with many chairs.

Ditto, with a yellow tint in HD Renovation.

The chandelier in the Chandelier Room.

An engine room, which can be found around Specimen 5's floor.

A second version of an engine room.

A third version of an engine room.

A hotel room with three doorways, the two on the right lead to dead ends.

The Brainframe Room in HD Renovation.

Close-up of the Brainframe in Spooky's HD Renovation.

The brain attacking the player.

A bedroom with a red fog and a bed on a wall.

The Elevator Room in HD Renovation.

Ditto, from another angle.

An aquarium with blood and bones.

Out of order aquarium next to a bloody aquarium with bones.

Spooky's mansion inside an aquarium filled with fish.

The Endless Hallway, with its walls closed in.

A curved wall in a lab room (SM Lab 3) in HD Renovation.

The non-euclidean door in a lab room in HD Renovation. 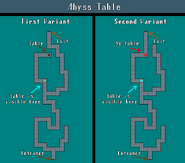 The abyss table room, with its two variants.

The P room, with its endless variant.

A Winding Hall room, with its endless variant.

The dungeon room with the iron bars (Endless Mode only), with its two variants.

A visual representation of the 4/2 room.