A form changing creature that is believed to be an extraterrestial, though it was not officially proven. Proved very effective on most subjects, but deemed too difficult to contain. The specimen broke out of its containment area due to frequent electrical malfunctions.

Specimen 10 (A.K.A. Parasite) is a hostile enemy in Spooky's Jump Scare Mansion. It is first encountered at Room 617.

Specimen 10 is a parasitic alien life form. Before encountering the player, this creature lived inside the old Specimen 10. It was the cause of the abandonment of the GL Labs's facility starting from Room 610.

The first form resembles an armless humanoid figure with a deformed upper body that seems to be composed of two parts: The yellowish organic layer that covers the entire upper body, and the main body with no arms and bare humanoid legs.

This appearance is also included in its form where its torso opens up into two parts that make an opening with small teeth surrounding the inside walls of its apparent mouth.

The second form resembles a large, leech-like creature. This form retains the same colors as the former. Similar to the old Specimen 10, this form is divided into separate segments, which slither along the ground. The inside of this form has at least two visible sets of teeth.

Specimen 10 appears in Room 617 after the player uses the generator. At first sight, the player sees the old Specimen 10 coming out of the vents, crawling towards the player. However, shortly afterward, the actual specimen erupts from the head of the latter, killing it. Now the new Specimen 10 begins to chase the player. This Specimen cannot go through walls and moves rather slowly, although slightly faster than Specimen 5.

If the player gets too close to Specimen 10, it will reveal its huge vertical mouth inside its torso and attack the player, dealing 45 damage while causing constant disturbing visuals at the same time. It will close up again if the player stays away from it for a brief moment.

It should be noted that hitting Specimen 10 with the axe can force it to transform into its worm form. In this form, the axe is useless against it and deals 20 damage to the player with a one second cooldown. It will turn back to its first form once the player goes into another room.

Specimen 10's attacks leave the player's vision covered with a yellow, slimy substance for a period of time. The less health the player has, the more it covers the screen. It will slowly fade away as the player regenerates health.

Every time it changes between any of its forms, a hallucination will flash the screen accompanied with a sound.

Because of how slow it is, the player can usually outrun this specimen. However, if the player stays far away from Specimen 10 for a few seconds, the creature will give a flashing screen as a warning before transforming into its worm form, in which Specimen 10 can move quicker than the player's sprinting speed.

When the player is killed by Specimen 10, they will be presented with a flashing screen, with text reading as follows:

"Now you have nothing to fear.

Now you have nothing to think.

After all you're just an animal.

It's much easier than trying to think."

During this sequence, the player can briefly see the hidden binary code behind the text:

"You are more than just an animal.

Use the soul you've been given.

And be responsible for your actions."

Trying to fight or outrun Specimen 10 is ill-advised, as its second form is far more effective at catching up with the player and possibly killing them. Instead, one should keep a relatively close distance with Specimen 10 to stop this from happening, as its first form is easy to avoid due to its reduced speed. Outrunning it in small rooms is possible.

A worm like creature that inhabits the old rundown GL Labs. A genetically modified eel that was supposed to be extremely violent but instead was very passive. Though not effective it was kept as a pet until the facility was abandoned due to specimen XXXXX.

Old Specimen 10 (A.K.A. Worm Eel) was a hostile enemy in Spooky's House of Jump Scares, first encountered in the abandoned GL Labs's facility starting at Room 610.

Old Specimen 10 was a large, floating worm. It was made of various distinguishable segments. Old Specimen 10's front-most segment appears to have black eyes and, in its gaping mouth, many sharp fangs. Its skin was pale and appeared to be slimy.

In the current version of the game, only its head is shown.

Before the 2.7.1 update, Old Specimen 10 appeared around Room 617. After the player used the generator, it would begin to chase the player.

Hitting Old Specimen 10 with the Axe didn't harm it -- it only made a noise.

Old Specimen 10 dealt about 20-30 damage on contact. It crept rather than float and was quite slow. It could not go through walls either.

Following the 2.7.1 update, it returned as a passive specimen, as stated by the CAT-DOS.

In the game, it somewhat served as a host for the parasitic Specimen 10. When the player sees Old Specimen 10 crawling out of the vent, it will not attack -- instead, the new Specimen 10 will pop up from the latter's head, killing it, and shortly afterwards beginning to chase the player.

Along with being given a fully 3D model, Specimen 10 now has an animation for opening its mouth and for morphing back into its humanoid form. The slimy substance that covers the player's screen when hurt is now slightly animated.

The Old Specimen 10 will not crawl toward the player before being ruptured by the new Specimen 10.

The worm form now deals as much damage as the first form. It is also unaffected by the axe and will not transform into its worm form when hit.

When it attacks the player, it will morph back into its first form, but the form is maintained between rooms instead of reverting to the humanoid form. Its worm form can break the doors down faster than its humanoid form, taking them down in a single bash.

Specimen 10 moves faster than in the original game while in its humanoid form, moving at about half of the player's walking speed. The worm form is still faster than the player's sprinting speed but can have trouble taking very sharp turns or going through doorways, getting slowed down in the process.

It will now keep its mouth open indefinitely for one room when the player gets too close. Additionally, it walks slightly faster when its mouth is open. 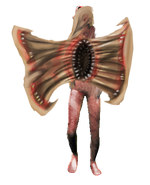 The yellow substance on-screen when Specimen 10 hits the player.

A really close look at Specimen 10.

Specimen 10 morphing back into its humanoid form after attacking the player.

Old Specimen 10's CAT-DOS entry, with the name of the Specimen being glitched-out.

Ditto, after being ruptured by the new Specimen 10.

A full view of Old Specimen 10.
Community content is available under CC-BY-SA unless otherwise noted.
Advertisement