A floating red figure that was found inside a secret area below a large abandoned corporate office once owned by a restaurant franchise. The specimen is extremely violent and also seems to leave the house at will despite various containment methods. Victims vanish on contact with specimen but sometimes remains of the victims have been found inside the testing chamber days later. Proved not effective as victims souls do not remain after contact.

Specimen 11 (A.K.A. Food Demon) is a hostile enemy in Spooky's Jump Scare Mansion. It is first encountered at Room 710.

Specimen 11 is a floating, red humanoid creature with a demonic appearance. Its eyeless head bears two large horns. Specimen 11 also has long claws at the ends of its fingers and lacks clothing. Not only is its head eyeless, but it also appears to be lacking both ears, a nose, and a mouth of any kind. Specimen 11's eye sockets leak blood down its face.

Specimen 11 deals 45 damage on contact, killing the player in 3 consecutive hits. After attacking, Specimen 11 will float away for a few seconds before continuing chase.

During the chase, Specimen 11 can occasionally turn all doors in a room invisible. This is especially dangerous in open rooms where the location of exit doors are vague. When it's near the player, it will speed up in order to close the gap and hit them. It also moves at the same speed as the player's walking speed, faster than the previous incorporeal specimens.

At random intervals, it will also inflict a variety of full screen visual hallucinations. Hitting Specimen 11 with the axe will make it teleport to any place around the player.

When Specimen 11 kills the player, there is no initial death screen. Instead, it will teleport them to the "Meat Hallway", which is a set of non-euclidean hallways made out of red meat. At the end of the fleshy hallway, Specimen 11 appears to wait for the player. If they go back, they will end up at a dead end, forcing them to come back to Specimen 11.

If the player character comes closer to Specimen 11 in the Meat Hallway, they will be presented with the death screen, with black and white colors and reddish, meaty visuals, with text that reads as follows:

"With every bite with bone and skin.

The temple groaned and shook again.

His dwelling place did I neglect.

To the end with bad effect."

As this message is being displayed, it flashes a binary code:

"Believe in God, but question the teachings of men."

Specimen 11 is among the more dangerous specimens in the game, capable of floating, phasing, creating visual disturbances, and hiding exit doors. Specimen 11 can also keep a decent pace towards the player.

Similar to Specimen 4 and Specimen 8, the best way to deal with Specimen 11 is to prevent it from ambushing the player from behind walls or across gaps down the path. However, this must be done swiftly and safely due to its speed.

Environmental awareness is also tested through the visual distractions and invisible doors. As long as there's familiarity with the environmental layout, rooms can be traversed without falling behind. This will also work when finding the door, as locating them can be difficult in open rooms where their positions are vague.

As the axe can potentially negate getting caught, it should be used as a last resort, for it is not certain to work, and may inevitably result in a game over.

Specimen 11 now has its left hand raised toward the player, as if it's attempting to catch them, and it now has a bright glowing flame between its horns that emits a dim yellow light.

It now spawns close to the door behind the counter of the restaurant.

It has a teleporting animation when it gets hit with the axe and no longer speeds up when close to the player.

When Unknown Specimen 1 is present, Specimen 11 is unable to make doors disappear. 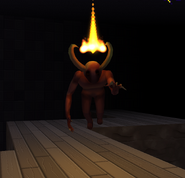 Specimen 11 attacking the player, who is futilely swinging the Axe at it.

Specimen 11 waiting in the "Meat Hallway" as seen in the HD Renovation (old).

Specimen 11 waiting in the "Meat Hallway" with outstretched arms.

Specimen 11 in its trading card.

The hallucinations Specimen 11 harms the player's focus with.
Community content is available under CC-BY-SA unless otherwise noted.
Advertisement