An old Victorian mansion that seems to build itself around its environment. The specimen sometimes chooses a 'host' to posses and uses them to attack the subjects with various means depending on the host's characteristics. Not much is known about the origin of this mansion, but signs occasionally show an earlier massacre or tragedy has taken place within the mansion. Proved very effective but varies itself too often to be a reliable method of extraction.

Specimen 12 is, in itself, Room 810. Its host, the hostile enemy that will chase the player in Spooky's Jump Scare Mansion, is first introduced here.

Specimen 12 is an old, Victorian mansion with supernatural properties. According to CAT-DOS, the mansion seemingly built itself around its environment and can choose a random "host", manipulating them to attack other subjects through various means. These means depend on the new host's characteristics.

The "mansion" is large, having many rooms but some are locked/broken and the hallways have numerous decorations; such as wooden tables, chairs, ornate doors, and bookshelves.

The current "host" of Specimen 12 is The Old Man - a balding, middle-aged male human with a yellowish or tanned complexion. He sports a tan trench coat, dark gray leggings, and brown shoes. His visage features a rather large nose and an eerie, constant smile. He carries a large sharp sickle in his right hand, which he drags along the floor.

Specimen 12 - "the mansion inside a mansion", is located at Room 810. While wandering inside the "mansion", the player will have many dangerous encounters with The Old Man. They must try to hide before he comes, as it'll be impossible to run away from him in the rooms of the mansion. The player's goal is to find keys used to unlock several doors to progress through the Room 810. Ultimately, they'll find the exit key and escape.

Once an encounter is triggered (i.e. just before the Old Man enters the room the player is in) the player cannot exit the room. The player must hide inside a closet or behind boxes to avoid a game over. The Old Man will enter the room, looking for the player, and then leave the room; the message "I need to hide!" will appear if the player attempts to use the door.

While inside the "mansion", The Old Man can instantly kill the player on contact up until the player tries to leave the basement with the exit key, which is when he deals only 45 damage but lands a hit every half a second, meaning one close encounter with him could prove fatal.

Outside the mansion, The Old Man will enter the room by slamming the door open. He is very slow and easy to evade.

If the player gets killed by The Old Man, a close-up of the Old Man's face constantly smiling will be shown, alongside multiple distorted and bloody images behind him.

In Endless Mode, he has two modes: "docile" and "active".

In docile mode, he walks really slowly and doesn't actively follow the player, his behavior is the same as when he's looking for the player in Room 810. The theme, "Gummy Worms with Gummy Bear Heads", plays when in this mode.

In active mode, his chase behaves much the same way as it did in the main game after leaving Room 810, moving fast and following the player. The theme that plays is "Here Comes Trouble".

In regard to the mansion, the player will no longer have to interact with the stairs to get to the bedrooms. They also have railings. The peppers that were on the table of the dining hall have been removed.

The Old Man has a new voice actor, voice lines, and a fully animated 3D model. He will sometimes speak in a low demonic voice when chasing the player outside of Specimen 12. He also makes footstep sounds when moving.

He walks faster upon exiting Room 810 and no longer rushes the player if they're not hiding, giving them time to do so instead of an instant game over. He will keep chasing the player from the basement up to Room 810's exit instead of chasing just in the basement and then suddenly reappearing in the dining hall.

As of the Summer 2019 update, he can now sprint. He starts off with 0 stamina and after a while it will begin to rise up. Once it hits 100, he will dash towards the player while making Howard's jump scare sound. His sprinting speed while inside Room 810 is the same as the player's walking speed, but outside it is faster the player's own sprint speed, although it lasts for a short amount of time.

If the player tries to attack the Old Man, instead of ignoring him, he will now swing his sickle in the air, causing the screen to flash white followed by a clashing sound, parrying the attack.

The Old Man can appear during Specimen 13's chase. Just like the player, it is slowed down by the water. His sprint meter will also fill up slower. It also walks over crates and under the water when submerged.

The Old Man in the HD Renovation.

Ditto, sprinting towards the player. 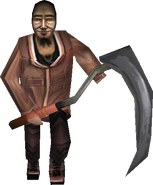 The Old Man's sprinting animation in the HD Renovation.

The Old Man walking under the water in Specimen 13's rooms in Endless Mode.
Community content is available under CC-BY-SA unless otherwise noted.
Advertisement