An ancient water dwelling creature believed to be a lost soul who died tragically during the Deluge. Proved extremely effective against subjects that could not swim or fell for the specimen's lure.

Specimen 13 is the penultimate Specimen the player encounters in Spooky's Jump Scare Mansion. She first appears in Room 910.

Specimen 13 resembles a young white woman with shaggy, grey hair. Before the chase, she is seen sitting on a floating crate, with her back to the player, wearing a towel around her waist. She reveals her true form during her death screen, where she morphs into a black-eyed elderly woman with long sharp teeth.

Specimen 13 lurks within the flooded rooms of Room 910. She quietly sits on top of a floating crate. When the player gets too close, she will dive into the water and begin the chase.

Specimen 13 deals 15 damage with a half a second cooldown.

Specimen 13 will only move when the player is standing in the water and can move through walls. She can only be detected through loud splashes she makes when moving. When the player stands on a crate, she won't move and will be unable to harm them. When the player goes back into the water, she will resume chase, although she will do so farther away than her last splash, preventing her from dealing unavoidable damage if she stopped moving too close to the player.

Specimen 13 now has a 3D model. The towel around her waist was replaced by what appears to be a fish's tail. She is wearing nothing on her top half. She now has an animation for diving into the water when the player gets close. Her model isn't visible while chasing, instead only showing the splashes, but does leave a foam trail when wandering around the room.

The attack deals 45 damage, killing the player in 3 consecutive hits, but there is now a 3 second cooldown between each hit.

She now moves faster than the player's sprinting speed while they're in the water but no longer goes through walls.

On the 2021 Halloween Update, she received a rework to her chase: new chase rooms have been added, her chase duration was increased to match the one from the original game, and has received some new mechanics. She no longers spawns from the entrance door, now spawning somewhere in the flooded rooms, most commonly spawning from the grates that can now appear in her chase rooms. These grates also create shortcuts for Specimen 13 which she will use to ambush the player.

When the player stands on a crate, she will start wandering away from the player, shown as a foam trail she leaves. She tends to go to the nearest grate. She's constantly moving and doesn't seem to stay in one spot.

In some of the new rooms, the water is too deep for the player to traverse. The player needs to find and restart a pump in order to progress or, in one case, a bridge to cross to the other side of the room.

It is possible but extremely difficult to dodge Specimen 13's attack if the player side-steps and moves forward when Specimen 13 is charging straight at them.

She now appears in Endless Mode like she would appear in Story Mode within her rooms and can rechase. Specimen 2, Specimen 5, The Old Man and another Specimen 13 are the only ones that can join the chase.

Both Specimen 5 and The Old Man are slowed down by the water, while Specimen 2 floats over it. The first two will not break down the door when entering, similar to Unknown Specimen 1's pixelated doors.

Specimen 13's CAT-DOS entry, with her true face as a portrait.

Splashing effect while swimming towards the player.

A closer look of Specimen 13, which is also her death screen. 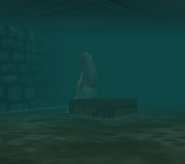 A pump in one of Specimen 13's new chase rooms.

A new chase room with a bridge.

A deep pool of water.

Specimen 2 chasing the player at the same time as Specimen 13.