A test specimen being developed at GL Labs. Should prove useful when released. Trials have shown it is adequately effective to average subjects.

Specimen 3 is a dark brown arthropod-like creature with a hard, shiny exoskeleton. Its body is similar to that of a centipede, while its face is more reminiscent of a spider's. Its body has four distinct segments, each with a pair of legs. Specimen 3's front-most segment has eight round, greenish eyes, and bears five sets of pincers.

Specimen 3 appears for the first time after the player reads the Generic Lab Assistant's note. However, the note can be ignored & the specimen will still appear. The Assistant claims to have heard a clicking noise before dying. After reading the note and moving towards the exit, a clicking noise is heard, signaling Specimen 3 has entered the room and has begun chasing the player.

It deals 30 damage on contact, with a cooldown of two seconds. However if the player is below 45 health Specimen 3 will instantly kill them on the next hit, effectively killing them in 3 consecutive hits.

During the chase, Specimen 3 creates holes in the ceiling from which it may drop from. It crawls instead of floating like previous Specimens, and moves at the same speed of Specimen 2.

It takes about 4 to 8 seconds for Specimen 3 to drop from one of the holes in the ceiling and begin its chase.

Specimen 3 is corporeal and easy to avoid. Sometimes it may not even come down from the holes, and hitting it with the Axe will stun it for half a second.

Each time Specimen 3 is hit, 2 rooms from its chase will be deducted. The chase lasts from 10 to 19 rooms, meaning if it is hit 5 to 10 times, the chase will end once the player goes into the next room. 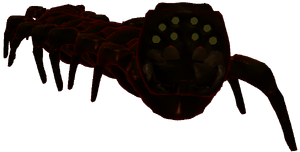 Specimen 3 now has ten body segments as opposed to the four it had in the original game. Its body is darker and redder and has proper animations.

Upon dealing damage to the player, it crawls away, scuttles about in a circle, then resumes the chase. The same behavior applies when it is hit with the Axe or Sword. It will not instantly kill the player if their health is below 45, unlike in the original game.

Its speed starts a bit slow but quickly ramps up, going faster than the player's walking speed and slows down when taking turns. It is recommended to conserve stamina by sprinting in short bursts so Specimen 3 doesn't catch up to the player.

It will crawl out of a hole in the ceiling just after the player passes under one, instead of just spawning under it. It will not always come down from the first hole the player passes under, however. In certain rooms, such as rooms with a high or absent ceiling, it enters through the door by bashing it down.

Hitting it with the axe will not deduct rooms from its chase anymore.

Specimen 3 now has a death screen, which is as follows: upon killing the player, the player will wake up while laying down in Room 120 as they helplessly watch multiple Specimen 3 coming out of holes, before being mauled to death. As the Specimen 3s approach the player, multiple flashes of text will appear:


In a land of dreams


I thought I could be free

A demonstration of this death screen can be seen here.

Specimen 3 revealing itself for the first time in the HD Renovation (old).