A 14th century spirit that was contained and relocated here. Tests have yet to reveal origins, but all relevant information has been placed into testing chamber. Proved effective, but not greatly more than previous specimens.

Specimen 4 (A.K.A. Ringu) is a hostile enemy in Spooky's Jump Scare Mansion. The player first encounters her starting at Room 165.

Specimen 4 appears to be an adolescent female with long, messy, black hair and pure-white skin. She has solid black eyes and an abnormally wide mouth with black lips. She wears a plain, light-gray garment with wrist-length sleeves and a white sash around her waist. Her fingers extend into long sharp claws that are stained blood-red. Her legs from the knee down are visible, revealing them to be black.

In Endless Mode, she gains two additional forms. The first form is a more realistic and sinister version of her original design. Her face is much more detailed with large black eyes and blood around her lips. Her hair, skin, and dress remain largely the same, but now they are more detailed, with her dress being stained with blood and her belt turning red. Her hands now have long, bony fingers covered in blood, rather than the original form's claws. Lastly, her legs now match the color of her body instead of the original black color.

Her third form is very similar to her second form. The two biggest differences is her mouth is now hanging agape, showing long sharp teeth and a pointy tongue. She also has two extra pairs of twisted arms sprouting out from her back. In this form, her body and head contort and shake violently.

Specimen 4 is encountered at the conclusion of Room 165. The initial room resembles the interior of a school, consisting of a non-linear hallway connecting various classrooms, some of which contain notes offering potential insight on Specimen 4. The end of the hallway connects to another room, which is where Specimen 4 appears upon reaching the hallway intersection leading to the room's exits.

When Specimen 4 attacks the player, she will deal 45 damage to the player with a 2 second cooldown. She can kill the player in 3 consecutive attacks.

Because Specimen 4 appears to be a spiritual, incorporeal entity, she is capable of a few things during her chase: levitation, phasing through walls, and floating above abysses and acid pits. She moves slightly faster than Specimen 2.

When Specimen 4 kills the player, the screen shows Specimen 4 against a static background. After staring at the player for a second, she lunges toward the player, with her mouth opening several times its normal size. The scene then cuts to an image of her bloody hands holding her stomach, now visibly larger, with the notes:

Although evading Specimen 4 is pretty straight-forward when it comes to mostly linear and/or short rooms, the player must always be careful when it comes to non-linear rooms and the abyss rooms.

Because specimen 4 can float and phase through walls, she completely ignores the layout of the room, always following the player's direction. This is especially dangerous in rooms such as the abyss rooms, which have constant direction changes, and spiral rooms. An advised method is to treat Specimen 4 as a regular corporeal enemy. Try to keep a fair distance from Specimen 4 and get her to follow the player to avoid letting her phase through walls or float over gaps. This works especially when it comes to U-turns, as the rest of the room can be spent having Specimen 4 follow the player through a normal pathway, without the burden of her cornering or ambushing them.

During her chase in Endless Mode, Specimen 4's static overlay will progressively become darker; to the point where the player won't be able to see what's ahead. After which the static overlay resets with the sound of a camera, restoring the player's vision. This effect happens through the entire duration of Specimen 4's chase. Her chase lasts exactly 24 rooms.

In addition to each of Specimen 4's forms being given a 3D model, there are now scan lines on her, and a black fog around her. The endless variant only has scan lines.

Specimen 4 now appears in Room 167 instead of Room 165. Her jaw opens as she gets closer to the player.

Her endless variant's static ability now creates a dome of static around the player, which slowly closes in until it covers the entire screen, before resetting. She is now faster than she was in the original game's Endless mode, being slightly faster than walking speed and moving at walking speed when looked at.

They both have a starting room in Endless Mode, with the endless version's room looking similar to the room where Specimen 4 appears for the first time except it's slightly changed, with black mold on the walls and a wall of static, which will disappear with the sound of a camera after the player walks up to it and the variant starts to chase.

Both variants can chase the player at any time as long as their respective starting rooms have been encountered. Escaping Specimen 4 in her normal form is easy due to the black dome being cast around her body, which is more visible in brightly lit rooms. 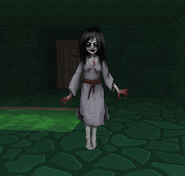 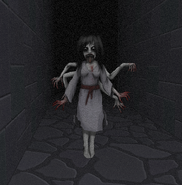 Ditto, with the wall of static.