Specimen 9 (A.K.A. Taker) is a hostile enemy and the secondary antagonist in Spooky's Jump Scare Mansion.

Specimen 9 appears to be a black and red, realistic looking humanoid skull with what seem to be collar bones extending down the rest of its "torso", with studs where its limbs had once presumably been.

It is likely the incomplete skull of its boss form, after GL Labs failed to kill it.

Starting from Room 51, players may occasionally enter a room with three paths: A door to the left, a dead end to the right, and a long dark hallway straight ahead.

After travelling down the long dark hallway for a while, the walls will gradually close in on the player until they can no longer move. After another second or two, Specimen 9 will appear at the end of the hall and turn and quickly rush to the player, filling the screen with its face at the time of contact. Most of the screen becomes red, with a huge wall of text composed solely of "TO TAKE THE DEAD", which references the fact that Specimen 9 "takes the dead", at least according to the CAT-DOS.

Aside from this, Specimen 9 can appear in any room if the player stays idle for two minutes. If this happens, Specimen 9's chase theme will start playing before appearing from the room's entrance door, and will begin to chase the player. It moves quickly and through walls, dealing 60 damage upon contact. In similar fashion to Specimen 5, the player will only die if their health is below 45 when hit. If not, the player will have negative health if hit when their health is between 45 and 60.

A survivor from the experiments conducted at Unit 731. Specimen 9 was found hiding in a condemned farmhouse in Russia. Specimen 9 appears to be drawn to the dead or dead bodies and seems to be made up of a clay like substance that changes density.

Containment has not yet been successful, but Specimen proves very effective against all subjects.

Specimen 9 in Boss Form is a large red humanoid creature that resembles an "evolved" or "full-body" version of its regular form. It resembles a skinless humanoid figure with a low hanging jaw.

During the boss fight, Specimen 9 will cycle through three different moves. All of its attacks deal 30 damage with a one second cooldown for each. They are as follows:

Its first attack involves creating 3 to 6 holes in the floor from which screaming pillars with distorted faces blast out, damaging the player if they so happen to be on top of one of the holes.

After this, it will create large shadow hands that stretch out across the room, following the player. After a short bit, the hands will stop, and smaller hands will shoot out from the larger shadow hand, potentially damaging the player. This attack also spawns smaller enemies who can easily be defeated with a single axe swing.

Its third attack rapidly shoots balls of energy at the player. The player must deflect the energy back at Specimen 9 using the axe. Successfully deflecting the energy will immobilize Specimen 9 for a short period, leaving it vulnerable to attacks.

It will eventually rise back into fighting after that short period; cycling through the attacks again. The attacks become deadlier and harder to evade as the fight continues. After enough hits, the boss will be defeated, and the player will get one of two endings.

Specimen 9 is now faster and instantly kills the player on contact. If the player is not AFK while Specimen 9 kills them (dying while trapped in the endless hallway or by simply moving after Specimen 9 spawns) they'll get the regular death screen. Otherwise, the following will happen: The screen will cut to black into a CAT-DOS version of Windows OS's error window with some cat ears, a ":3" face and a tail, named CAT-WIN. The window will continue to bounce around the edges of the screen, similar to the DVD Screensaver. Once the player hits the Spacebar or E key, a cutscene will play.

The player will appear in a dark room, unable to move. Suddenly, spotlights will turn on, going down the dark room and ending at a door. Shortly after the door opens, Specimen 9's theme starts playing, followed by Specimen 9 coming out of the door charging towards the player, ending the cutscene and showing the death screen.

In addition to Specimen 9 not spawning in Karamari Hospital, it cannot spawn in Arcade Rooms, Specimen 12 rooms when the player is hiding or CAT-DOS Rooms, presumably because these are rooms where the player is expected to stand idle, and therefore would make Specimen 9 a nuisance.

It now has a fully 3D model and an animation when hit. It also has a new transformation cutscene, wherein the standard Specimen 9 will zoom out greatly, and red clay will "collect" on it, turning into a full-body view of its boss form. The boss will then zoom out to where it hovers as the battle begins.

Specimen 9 returns in Spooky's Dollhouse, albeit with a minor role compared to his role as a major antagonist in the first game.

It now has a darker, more metallic look, and an unsettling grin. It is also larger than before, with a rounder shape. The 2D sprite is also used in the HD Renovation.

In Spooky's Dollhouse, Specimen 9 will appear if the player attempts to use the GL Labs tram before deactivating the Spirit Seal. After activating the tram, the vehicle will begin to run, but will eventually come to a complete halt due to the tunnel growing tighter like it did with its room in the main manor. After a few seconds, Specimen 9 will emerge from the tunnel and kill the player. It now makes grunting noises when it kills the player.

The new sprite replaces the old one in its death screen as well. The death screen is not present in HD Renovation.

Specimen 9 in the narrow hallway.

Specimen 9 rushing at the player and death screen.

Background of the death screen. 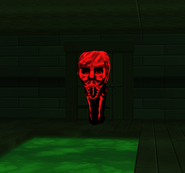 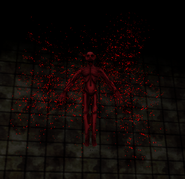 The texture of specimen 9's hand based attack.

The minions in HD Renovation. 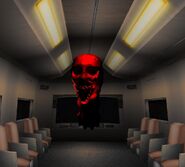