The Clown is a character introduced in the Spooky's Dollhouse DLC, the second DLC for Spooky's Jump Scare Mansion. He is encountered in the special "CLOWN" room in the Great Hall segment of the map.

The Clown has white skin with black lips and a wide grin, yellow teeth, a red nose, and black and red swirls where the eyes would be. He wears a red and yellow pinstripe shirt, with yellow sleeve that have red polka dots on them. He wears blue pants with purple polka dots.

The Clown is first seen in a cage in the CLOWN room. Every time the player looks away, he will inch closer from inside the cage, and strike a different pose.

When the player leaves the CLOWN room for the first time, the Clown will say: "Bye bye!"

After burning the hands in the furnace later in the area, he escapes from the cage, but is never encountered again. Occassionally, his voice clips can be heard. This behavior is updated in HD Renovation. 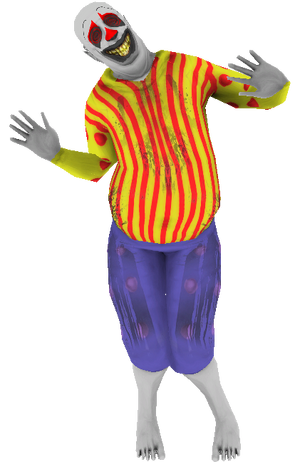 The Clown now has a fully 3D model. There are no other changes, with the obvious exception of the change in lighting.

In HD Renovation, The Clown is revamped for the most part.

After burning the hands in the furnace later in the area, he escapes from the cage and will randomly appear in the Northern side of the Great Hall, the entrance room to the Great Hall and the storage room where Woormy Charles is first encountered.

The Clown is completely harmless towards the player. When appearing in a room, it'll inch closer to the player when they look away, but otherwise will never actually attack them, and just strikes random poses as it inches closer while playing its voice clips. It can move even while the game is paused.

The Clown is an optional chaser in Endless Mode. To unlock it, the player must find Unknown Specimen 2's room. To the left of the dining area, there's a room with a large, empty cage. On the opposite wall to the cage there's a button, similar to the elevator button but instead of reading "DOWN" it reads "CLOWN". The message "Clown..?" will pop when close to the button. Pressing the button will play a party horn sound. Pressing it three times will spawn The Clown in the cage and the button will cease to function. The cage must be struck with the Axe or Sword in order to free The Clown. If the previous steps are done correctly, when leaving Unknown Specimen 2's room, the player should hear The Clown say "Bye bye!".

The Clown will not chase immediately after upon being freed, unless the player presses the "CLOWN" button one last time after The Clown's cage has been struck, allowing it to start its chase on the spot.

Just like in The Doll House, The Clown is harmless. It will spawn at the entrance door when entering a room. It can, however, bodyblock the player which can be dangerous when being chased by other enemies. The Clown will also say "Bye bye!" when it stops chasing the player.

The Clown in its cage.

The Clown encountered in the entrance of the Great Hall in HD Renovation. 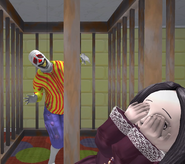 The Doll covering its eyes in front of The Clown. 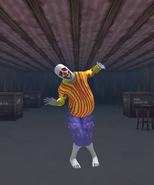 The Clown in the Storage Room.

The Clown striking a pose in its cage.

The Clown in its cage.

Ditto, now freed from its prison.

The Clown next to an inactive Unknown Specimen 2.
Community content is available under CC-BY-SA unless otherwise noted.
Advertisement