Unknown Specimen 3 (A.K.A. Spooper) is one of the specimens encountered in Endless Mode.

Unknown Specimen 3's normal form resembles a child wearing a ghost costume and black sneakers. The sheet is white and featureless with two eyeholes. It will become tattered and soaked with blood the more it is struck with the Axe, and in its bloodiest form, an eye can be seen inside its chest cavity.

As the chase starts, Unknown Specimen 3's parasite form resembles a pink fleshy ball that floats through the air. A single eye is located in the center of its body and it has two arms that claw at the air while it chases the player.

Unknown Specimen 3 will first be found standing in front of the exit door of any given room where it might spawn. It turns to face the player extremely slowly. The door cannot be entered when it is blocking it, forcing the player to use the axe on Unknown Specimen 3.

Upon entering another room, Unknown Specimen 3 will appear again blocking the exit, bloodied from the previous encounter. The player must continue to strike it with the axe and move to the next room, Unknown Specimen 3 becoming more injured each time. After destroying it in its sixth and most injured state, entering the next room will begin its chase.

The grimy rooms the chase takes place in are filled with a caustic air that will drain the player's health slowly, but only after 7 grimy rooms will the player start taking passive damage (1,6 damage per second) in them. After 5 grimy rooms, there's a 50% chance that either or both bloody Unknown Specimen 3 occasionally flashes in the room or the pink parasite form spawns, both of which pose no threat to the player. After going through 9 grimy rooms, there's a 20% chance that the player will fall to the ground and puke blood between 1 to 4 seconds after entering a room. This action inhibits movement and depletes 10 health.

Vomiting can be cancelled by going through a door at the same time as it occurring, which allows the player to negate damage.

When it kills the player, text appears as follows:

"Beyond that door is another world.

A world made of dreams...

A world where all your fantasies have come true.

A world lusting to include you."

The parasite form will now appear more rarely and relatively smaller. Instead, Unknown Specimen 3's bloodied form will occasionally flash on the screen, slowly turning towards the player before disappearing.

Unknown Specimen 3's introduction room is a regular room, specifically the room with 4 different doors, one at each end of a short hallway.

Unknown Specimen 3's normal form will now teleport to the nearest door to the player, preventing them from bypassing it in rooms with multiple doors.

Its chase music will now start as soon as Unknown Specimen 3 first blocks the door instead of only after being "killed." The player will immediately start taking passive damage after "killing" Unknown Specimen 3. The hallucinations can occur at any moment in the grimy rooms although the chance to vomit happens only after 9 grimy rooms.

Unknown Specimen 3's damage output has been significantly reduced, now dealing 0.2 damage per second but it now disables healing. Additionally, the player will be slowed down while vomiting instead of completely stopping in place. The player will not vomit if there is another enemy around.

It's good practice to look back at the entrance door while backing away from it during this specimen's chases as the player could get a surprise attack from either Monster 4 or Specimen 6.

Unknown Specimen 3 in its normal state.

Unknown Specimen 3 when close to chasing the player. 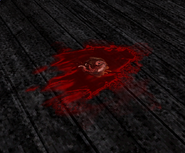 The fetus-like creature coughed up by the player.

The screen when the player vomits.

Unknown Specimen 3 in the HD Renovation.
Community content is available under CC-BY-SA unless otherwise noted.
Advertisement