Unknown Specimen 5 (A.K.A. Lisa) is one of the specimens encountered in the Endless Mode.

Unknown Specimen 5 resembles a woman with pale skin, long brown hair, and a tattered, dirty beige dress. Her head droops toward her left shoulder as if her neck is broken and her face is frozen in a wide grin. One eye seems to be missing while the other is dead white. Her arms hang stiffly down at her sides and her bare legs and feet seem to be swollen. While moving, her body stays rigid while her head and neck contort and shake violently.

During her game over screen, a close up of her face is shown with a centipede crawling out of her eye and various other bugs coming out of her mouth. Several of her teeth are missing.

The first sign of Unknown Specimen 5's presence is that the ambient sounds that usually play inside the mansion will suddenly go silent. From the third room onward, the screen will gradually become tinted in deep red. Occasionally, the slime variant of Specimen 1 (with its paint fading) will silently pop out of the sides of walls, always bearing a note. These notes are brief and ominous.

As the player walks through more rooms, the screen will become redder, alongside a deep, guttural ambiance. After 15 rooms, Unknown Specimen 5 will appear and begin chasing the player.

She enters through the door of each room. She can phase through walls. The player must keep her in their sights, otherwise, she will immediately appear behind them. She will slowly turn invisible if she hasn't teleported in a while, only becoming visible once the player stops observing her. She can still move when in the player's vision.

After 5 rooms of being chased by Unknown Specimen 5, the room counter will freeze until the player goes through 20 rooms, after which the chase will cease.

Every time she attacks the player, she teleports to a random place around them. She deals 30 damage with a cooldown of one second. The Axe has no effect on her.

If she kills the player, an image of her rotting face will flash onto the screen with text that reads as follows:

"You cannot dream without darkness.

"You cannot wake without pain.

"Tear off your foolish disguise."

The player will enter a small corridor that goes into a room with a bookcase and a table with a candle on it. To the right, there is another corridor leading into a "main hall", with a chandelier and a door that cannot be interacted with. On the opposite side, there's another corridor with an "exit door" at the end. Every time the player goes through the door, the room will loop, each time producing a few changes.

On the first loop, a phone will be on the table instead of the candle. It will start ringing and abruptly cut out, and will resume ringing again. On the second loop, the walls will look more worn out and the table is replaced with bones. On the third and final loop, the screen will have a deep red hue, the bookcase and bones will be gone and a table will be present in the main hall. Unknown Specimen 5 is seen facing the table, which has a note on top. She will disappear when the player gets close to her. After leaving the room, the player will be out of the looping room and the chase will begin.

The amount of damage Unknown Specimen 5 deals is much smaller, dealing about 15 damage per hit.

Her first appearance no longer stops ambiance, but will still stop the music. In addition, she can no longer teleport if observed for too long, her moving pace while observed has been drastically reduced and doesn't float over pits. She still has the ability to freeze the room counter, effectively making her chase longer. Although rarely, she can also loop the same room layout until the chase stops.

When ambiance stops, signifying her arrival, it will take 15 rooms for Unknown Specimen 5 to start chasing, and 5 for the room counter to freeze. After that, it will take 20 rooms for the chase to end, amounting to a total of 40 rooms of chase duration.

The overall mechanics of the Specimen have been overhauled, causing it to sporadically teleport less and to stop teleporting into walls. 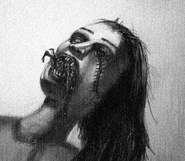 Close up of Unknown Specimen 5's face in the HD Renovation.

Second loop, bones appear and the walls are worn out.

Final loop, the table with a note on it.

Ditto, with Unknown Specimen 5 visible next to the table.