Woormy Charles is the second enemy and an optional boss encountered in Spooky's Dollhouse, the second DLC for Spooky's Jump Scare Mansion.

Woormy Charles is a tall, bipedal creature. His body is black and moist, and his limbs end in worm-like tentacles. His head is that of a hairless, earless white doll with hollow eyes. The way Charles moves appears to imply that he lacks bones or a skeletal structure.

Woormy Charles first makes an appearance in the Storage of the West Wing, behind a Doll gate. He lies dormant at the end of the corridor at the opposite end of the room, with the Winding Clock Key on him. Picking up the key or using the axe on him will wake him up.

Charles will begin wandering the Northside Studies halls (and Piano Room) and West Wing after he becomes active, although he will never return to the Storage. In each room Woormy Charles appears in, he will start in his dormant phase, but immediately get up afterwards. He will then walk around the room until the player enters his line of sight. He can also be heard walking around in adjacent rooms.

When the player enters Charles' line of sight, a faint TV static overlay will cover the screen, and Woormy will chase the player. During his chase phase, Woormy Charles will gain a substantial boost in speed, passing the player's sprint speed. He cannot follow the player into other rooms.

Charles can be pushed away by the axe and killed if he's hit 10 times. He can only be hit right after an attack when his head is down. If Charles is killed, he will not return.

Charles deals 15 damage per hit and attacks at a slow rate.

Because of Charles' above-average speed, precaution should be taken when in the same room as him. He can easily catch up to the player as he moves faster than them.

If Charles manages to corner the player, they can use the axe to push him away before he can attack. Killing him is hard as it requires a fair amount of hits and good timing to avoid taking damage. Charles only appears in select rooms so one can memorize where he appears and be careful when in those rooms.

When the player dies to Woormy Charles, the screen will change to show a person being tortured on a stretching machine. It displays the following text over the image:

"Form within form writhes and pulses.

Skeletal sinews stretch outward from beneath the skin wrapped around it.

It pulls until the skin's elasticity fails ultimately.

From these small holes the tendrils of bone finally escape.

You are finally free of this constricted bag of flesh."

Woormy Charles now has a fully 3D model. He now drags his tentacles on the walls as he walks.

He now roams the halls instead of automatically despawning when entering a new room. He also sits down instead of getting tangled up when defeated.

Woormy Charles now has a dedicated starting room in Endless Mode, resembling his starting room in Dollhouse, but slightly longer and more labyrinth-like. The exit door will be locked and the key will be at the end of the room on Woormy Charles's possesion. When the key is picked up, the chase will begin.

Woormy Charles will spawn at the entrance of the room or a random point in the room while chasing. He will roam around aimlessly until he notices the player and can be killed by hitting him with the axe 10 times, ending the chase. Hitting Woormy Charles will not deduct rooms from its chase. Woormy is able to bodyblock the player and block them off in rooms. Its collision will go away while attacking, however. It now deals 25 damage instead of 15.

Unlike in the DLC, he doesn't seem to give a static screen to the player when chasing them.

Woormy Charles dragging its tentacles on the walls.

Woormy Charles charging at the player in HD Renovation.

Woormy in the storage room. 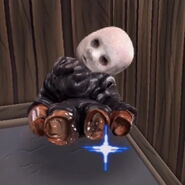 Woormy Charles chasing the player in the original version.

Ditto, with Woormy in view.

Woormy Charles after being defeated in HD Endless Mode.
Community content is available under CC-BY-SA unless otherwise noted.
Advertisement